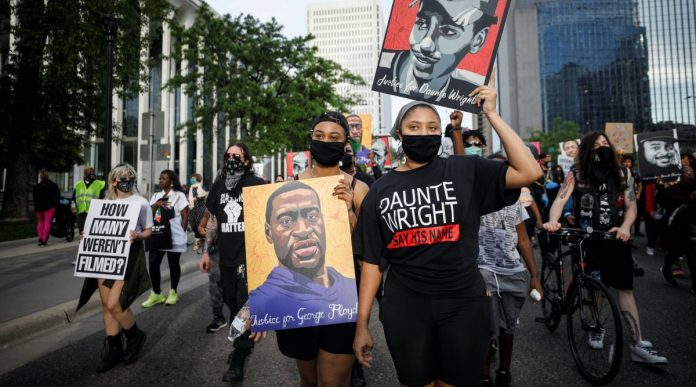 It was not the meeting that President Joseph Biden or his White House had in mind. One year after the brutal killing of George Floyd by a white police officer on a street in Minneapolis that saw bloody rioting all over America, President Biden had hoped for symbolism and substance on May 25, 2021 –meeting close family members of the slain African American man and signing legislation on police reform that would come to terms with high handedness of a force that was seen to specially target Blacks and minorities.

President Biden may have missed a date that he had set last month while addressing a joint session of Congress, but few accuse him or the Democratic party for not trying. And like all major legislations the George Floyd Justice in Policing Act 2021 is tied up in knots over language.

It was a private meeting that the President had in the White House with family members of George Floyd, a small gathering that included the Vice President Kamala Harris and a few lawmakers.

“The Floyd family has shown extraordinary courage, especially his young daughter Gianna, who I met again today. His murder launched a summer of protest we hadn’t seen since the Civil Rights era in the 60s – protests that peacefully united people of every race and generation to collectively say enough of the senseless killings,” Biden said in a statement after the meeting.

President Biden who wanted the police reform legislation on his desk by May 25 was not personally involved in the negotiations, leaving it to lawmakers to hammer out the details; but the White House made it clear that it was “… very engaged with a range of groups around the country—civil rights groups, police reform groups and advocates…”. And Vice President Harris in a statement made the point that the video of Floyd’s death “revealed to the country what Black Americans have known to be true for generations… We must address racial injustice wherever it exists. That is the work ahead”.

What took place on May 25, 2020 was something stunning and shocking — cops were called on Floyd for supposedly trying to pass a phony US$ 20 bill to buy a pack of cigarettes. Dragged out of his car and pinned on the ground to be restrained Officer Dereck Chauvin placed his knee on the neck of Floyd for a full nine minutes. Floyd went down gasping “I can’t breathe, I can’t breathe,” his last words captured so vividly. And the rest is history. America went up in smoke by way of protests, right wing and extremists poured gasoline on the flames through their incendiary remarks; and after a trial the 12-person jury in April 2021 convicted Officer Chauvin on all charges including murder and manslaughter; three other officers are awaiting trial; and Chauvin’s lawyers are filing for a mistrial, not an extraordinary move in a legal process of the kind.

The Justice in Policing Act went through the House of Representatives on a strictly party line vote. In a nutshell, the Bill would ban chokeholds like the one used on Floyd, get rid of the “no-knock” warrants that police use to get into private property, give the Justice Department greater latitude to subpoena police departments, increase funding for state attorneys general to investigate police departments and create a national registry of misconduct and abuse of police personnel. The legislation is stalling in the Senate as Democrats do not have the numbers. With a 50-50 evenly divided chamber, Democrats need 10 Republicans to cross over to advance the legislation to a full Senate vote. And those ten Republicans are not coming through even by a very long shot, if sentiments are anything to go by.

Negotiators in the Grand Old Party led by Senator Tim Scott, the lone African American Republican from South Carolina, are against a provision of the House Bill that does away with “qualified immunity”, a judicial shield that prevents victims and their families from suing police officers for alleged civil rights violations. The counter offer from Senator Scott has been to work around qualified immunity to allow victims and families to sue police departments and municipalities but not police officers. And if civil rights groups have not jumped into the Scott bandwagon, the reason is very clear: nearly everyone on the other side want to see the exact language that is coming as a counter offer. Police Unions are vehemently opposed to doing away with qualified immunity, a move that is only hardening the attitude of civil rights activists including Black Lives Matter.

Just as things were seemingly moving in a direction the White House wanted, a group of 10 Progressive Democrats has urged the leaderships in the House and Senate to make sure that the final version eliminated qualified immunity. “We are concerned by recent discussions that the provision ending qualified immunity for local, state, and federal law enforcement may be removed in order to strike a bipartisan deal in the Senate. Given that police violence, as a weapon of structural racism, continues to have devastating and deadly consequences for Black and brown lives across our country, we strongly urge you to not only maintain but strengthen the provision eliminating qualified immunity as negotiations in the Senate continue,” the lawmakers said. The Biden White House cannot have a division in rank and file as the Senate version of the police reform legislation will have to be voted again in the House after reconciliation in language. Democrats have only a eight seat majority in the House.

The political advantage for President Biden is that no one is slamming him for having missed a self-imposed deadline. Lawmakers on both sides of the aisle are stressing that progress is being made and that the accent is on coming up with a substantial piece of legislation, not one that is put together for the sake of expediency. Or as the veteran civil rights leader Reverend Al Sharpton put it, “My concern is, and I’ve communicated this to the White House, is that we come with a toothless bill to meet a hard deadline. I’d rather have a bill with teeth late than a toothless bill on time.” The bottomline realisation seems to be that whether it is police reform or dealing with institutionalized racism, it would have to be dealt with patiently given the sensitivities; and that watered down or diluted reforms to satisfy a time line are not an option.

Both in the House and Senate there is a group of Democratic lawmakers who take the view that Republicans have to be called out, even repeatedly if needed, in the pursuit of an agenda that is reflective of American values and ideals. And if by this there is going to be legislative gridlock or repeated defeats in floor votes, the perception is that the Democrats are politically better off. It is for this reason that progressive Democrats seem unwilling to compromise on such issues as police reform, voting rights, national commission on the riots of January 6 or the Infrastructure Bill, all of which are held up for one reason or another. And if Republicans are of the view that these issues will make a huge difference in the Congressional elections of 2022 in their favor; Democrats feel that pinning down the GOP on these same topics would do a world of good to them as well.

(A former senior journalist in Washington covering North America and United Nations, the writer is currently a Professor of Journalism and Mass Communication in the College of Science and Humanities at SRM Institute of Science and Technology, Chennai)