If it had not been so real, it could have been dismissed as imagination. Top US official Nancy Pelosi’s visit to Taiwan, despite repeated warnings from China, not to land there,  may have ended up needlessly plunging south-east Asia and the world into a fresh crisis.

The government in Beijing is already bristling.  If President Xi Jinping goes ahead and carries through its threat of retaliation, as yet unspecified in which manner, the world will have to face the brunt of what is essentially rising Sino-US rivalry.

The Taiwan visit opens a fresh area of tension with potential repercussions on a world, already bruised economically due to the Russia-Ukraine conflict in eastern Europe since February 24 this year. 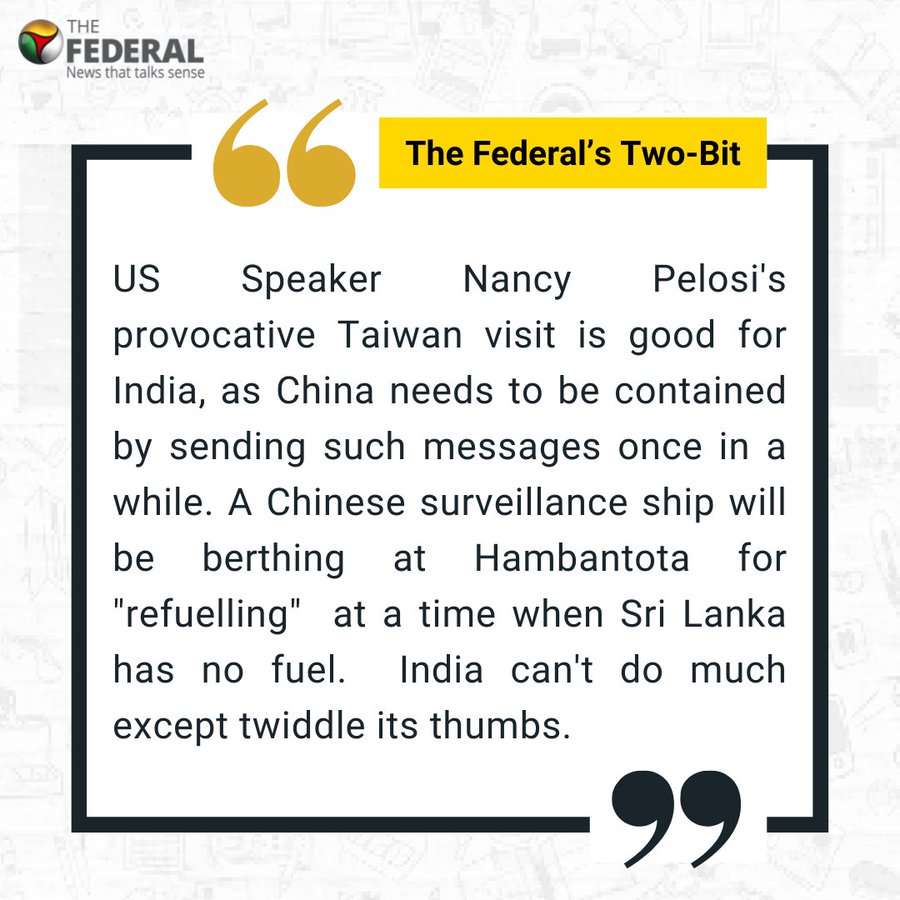 Pelosi, the Speaker of the US House of Representatives affiliated to the Democratic Party, landed in Taiwan on Tuesday night as part of a trip to South-East Asia. Technically, Pelosi does not represent the US government and the Biden administration has attempted to wriggle out of the sticky situation with Beijing by emphasising this fact.

Yet, Pelosi holds the third most important Constitutional position in the US – after the president and the vice-president. But the Chinese government under President Xi Jinping refuses to accept this technicality and insists that Pelosi’s visit implies Washington’s tacit acceptance of Taiwan as an independent country.

The island of Taiwan, always a part of China, sheltered the rebels of the then Chinese nationalist party (Kuomintang) headed by Chiang Kai-shek when they fled the mainland after being overthrown during the Communist Revolution in 1949. Since then the nationalist party, has for all practical purposes, turned Taiwan into a separate entity. China has never recognised Taiwan as an independent country and considers it a province, even if one that is renegade.

Furthermore, China’s active relationship with any country is possible only if it recognises China under the One-China policy, implying Taiwan is part of it. The US recognises this policy, so do around 180 other nations with ties to Beijing.

In 1997, the then US Speaker Newt Gingrich had similarly visited Taiwan defying Chinese warnings. There was no major consequence that followed Gingrich’s visit.  But the difference between the China of 25 years ago and the present one is vast – with Beijing staking a strong claim to be recognised as a global superpower.

For the US, Pelosi’s visit serves to assert its standing as the world’s most powerful nation despite setbacks in recent times in Afghanistan, the Middle-East and its inability to prevent the rise of Russia as a major power.

More specifically, given the serious challenge China is posing to the authority of the US in the South China seas and in the Pacific, the visit appears to be part of a strategy by the American deep state to challenge Beijing’s increasing dominance.

Pelosi’s visit gives the US administration the option of “plausible deniability,” which is that she does not represent the Biden government as she is an independent official at the head of the House of Representatives and not bound by diktats from the executive. Yet, she is number three in the US hierarchy, which means in the event of anything untoward happening to the president and the vice-president she will technically occupy the top position. So, Pelosi is by no means a pushover.

Beijing, going by indications from top officials, may not be willing to accept these nuanced arguments and would prefer to view the visit as a major affront to its sovereignty. It has already increased its military activity across the Taiwan straits, a narrow body of water, 160 km wide that separates the two.

It is inconceivable that China will take precipitate action against the US.  For, though the two are at loggerheads politically, on other fronts the inter-dependence has never run so deep. The US officially would want to “decouple” but that is easier said than done. China too is deeply enmeshed in its ties to Washington.

For example, Intel exports several billion dollars’ worth microchips to China. According to another figure quoted by the Harvard Business Review, in 2016, the value of Chinese acquisitions of US firms spiked 376 per cent to around $55 billion – big under any standards. Until regulators stepped in and placed checks,  venture funding by Chinese entities of US acquisitions dramatically increased by 700 percent to $8 billion from 2014 to 2015  and further to $11 billion from then till 2018.

Having ratcheted up warnings to the US against the visit, it will now be incumbent on Beijing to do something. If not, its bluff will be called.   With Pelosi ‘daring’ to visit Taiwan, Beijing is forced into a situation where it would want to show it means business yet leaving the deeper ties with the US unruffled since so much is at stake.

Also read: EXPLAINER: Why Pelosi went to Taiwan, and why China is angry

It is not entirely inconceivable that Pelosi may have acted in tandem with Biden (as both belong to the Democratic party) to further their own domestic agendas among their constituents as political leaders who value democracy and free expression. Globally, the visit serves to project to the world that the US cannot and will not hesitate to challenge any country, howsoever powerful it may claim to be.

But, Taiwan?  The consequences for this island-country, officially called Republic of China, could be disastrous if either China or the US over-reacts and starts something that cannot be stopped – like what is happening to Ukraine, caught in the larger conflict between the US-led West and Russia.