In the concluding part of our series on ‘Operation Gulmarg’, Pakistan’s failed invasion of Kashmir in 1947, we revisit the dramatic battle that decided the fate of the Valley 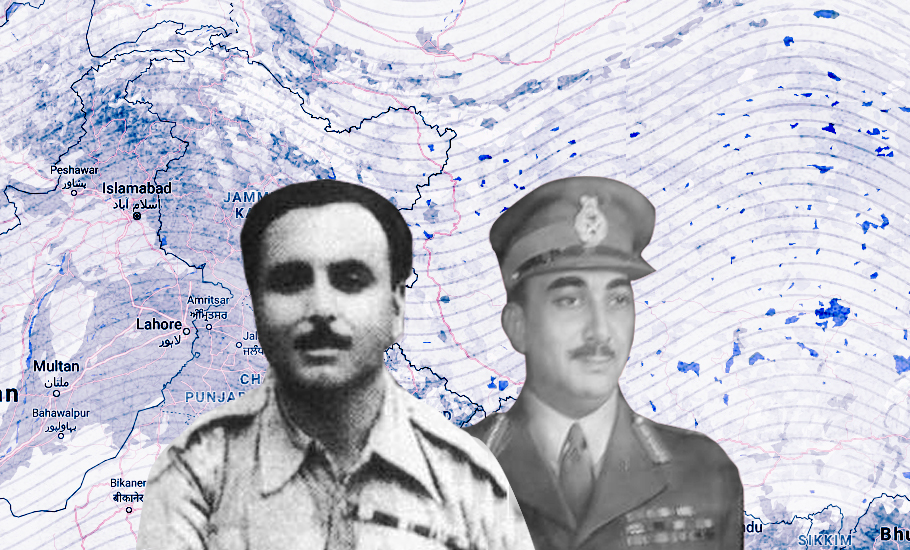 A day after Maharaja Hari Singh signed the instrument of accession with India, Colonel Diwan Ranjit Rai took a flight from Delhi’s Willingdon airport at first light with a handful of men.

Not sure if the airport was still safe and had not fallen into the hands of the Pakistani invaders, the pilot of the plane, Biju Pattnaik, the man who was to later become a successful politician, circled the airfield for about 30 minutes. When nobody fired at the plane, Pattnaik decided to land the plane at the airfield.

By the end of the day, India had scrambled 30 Dakotas to fly two companies of the 1 Sikh Regiment to Srinagar. Once he had an adequate number of men to secure the airfield, Col Rai immediately left for Baramulla, where the invaders had been camping for the past three days.

India’s position was extremely precarious. Before Col Rai dashed to Baramulla, just 40 men holding a defensive position east of Baramulla stood between the 5000-strong army of invaders and Srinagar. Col Dewan launched a counteroffensive on joining the state forces east of Baramulla. But he was killed in the gunbattle and 1 Sikh had to withdraw further east towards Srinagar.

Several years later, Major Agha Humayun Amin, a Pakistani officer was to review the first war between India and Pakistan over Kashmir and note October 27, 1947 as the day when the “golden opportunity to capture Srinagar” was lost forever.

Brigadier Akbar Khan, the Pakistani officer in-charge of ‘Operation Gulmarg’, was visibly livid that morning. Since the Indian army landed at the Srinagar airport to repulse the Pakistani lashkars that had entered Kashmir, he had been pleading with the government to send armoured cars into the Valley to support the invaders. But, the Pakistani government had refused to budge from its position of fighting a covert war.

“Our men will fight in plain clothes. Officially, Pakistan will not take ownership of the invasion,” Khan was told by a senior minister in the government.

Akbar Khan threw his hands up in disgust. “The Indian army is now officially fighting in the Kashmir-Baramulla sector. Why can’t Pakistan send its army to support our tribal jihadis?” Khan retorted.

“The Quaid-e-Azam, Khan was told, can’t order the British commander of the Pakistan army to engage and he will have to rely on the tribals to get the job done.

Akbar Khan knew that Pakistan’s political compulsions would cost his men the ongoing war in Kashmir. Without proper military backup, he realised, the untrained lashkars would be decimated by the Indian army. He needed to find a way out.

The solution he was looking for came from Major Masud, one of the army commanders at the GHQ. The commander of the 11 Cavalry stationed at Rawalpindi suggested he’d send a squadron of armored cars into Kashmir without seeking the assent of the government at his own risk. The armoured cars were to be operated by army regulars in civilian clothes. But, while they were discussing the secret plan, Raja Ghazanfar Ali, a Muslim League politician, entered the room and on learning of the proposal shot it down.

“You can kiss Kashmir goodbye forever,” Khan fumed and resigned to Pakistan’s fate.

While Brigadier Khan was desperately trying to arrange armored cars for ‘Operation Gulmarg’, the Indian army decided to send its 7th Light Infantry with its armoured cars to bolster the defence of Srinagar. On November 1, when Lieutenant Noel David left with his squadron for Kashmir from Ambala, he had no premonition of the stellar role he was to play in the battle for Srinagr.

The Indian army continued to fly its soldiers into Srinagar on civilian planes throughout the last week of October. By the first week of November, the balance of the war with the Pakistani invaders had started tilting towards India.

The Pakistani lashkars were still stuck at Baramulla, repulsed by 1 Sikh that had taken up strong defensive positions west of Srinagar. The lashkars, not trained to fight in open grounds, decided to resort to guerilla warfare and avoid the Indian army position altogether. In small groups and batches, they bypassed the Indian army and appeared behind them at Badgam, just a few kilometres from the Srinagar airfield.

On November 3, the lashkars, dressed like native Kashmiris, ambushed an Indian company guarding Badgam and inflicted heavy losses on them. The Indian company, led by Major Somnath Sharma, fought bravely to the last man and pushed the invaders back. For his exceptional bravery, Major Sharma was to posthumously become the first recipient of India’s highest gallantry award--the Param Vir Chakra.

In spite of the looming invasion, the atmosphere in Kashmir that November evening was buoyant and festive. Since it was considered an auspicious day, several marriages were to be solemnised and celebrations were on in several parts of the state’s capital.

Barely 7 miles away, at a place called Shalteng, tribal invaders were getting ready for the final assault on Srinagar. Around 5000 of them had gathered at Shalteng the previous evening and were waiting for a signal from their commanders to light up the sky with gunfire.

Just before the attack was to begin, an armored car crept up behind the lashkars. Believing that the reinforcements had been sent by Pakistan, the lashkars started celebrating raucously. They were soon to be shocked by the turn of events.

A few metres west of them, Indian Brigade Commander Brigadier LP ‘Bogey” Sen was giving final touches to his plan for a frontal assault on the invaders.

As part of the plan, he had asked Lieutenant Noel David to abandon their recce mission and take up a position behind the tribal army. Lt David, who had left Amaala with his armored car, sneaked up behind the lashkars gathered at Shalteng, creating the impression that he was one of them. And when a cracker went up in the eastern sky, David’s car unleashed a barrage of gunfire on the tribals.

The tribals were now caught between Lt David’s fire from behind and the Indian soldiers in front of them. In the confusion that followed, the tribals forgot to fight and made a run towards an open ground behind them. The retreating invaders were strafed by Indian warplanes. Around 500 of them were killed within minutes. The rest of them retreated to Muzaffarabad, practically ending Jinnah’s dream of becoming the Quaid-e-Azam of Kashmir.

In Srinagar, when the sky was lit up with gunfire, residents clambered up their terraces, believing that fire crackers were going off at marriage processions. They were to learn the next morning that invaders had been repulsed right from their doorsteps. And Kashmir was now firmly in India’s hands.