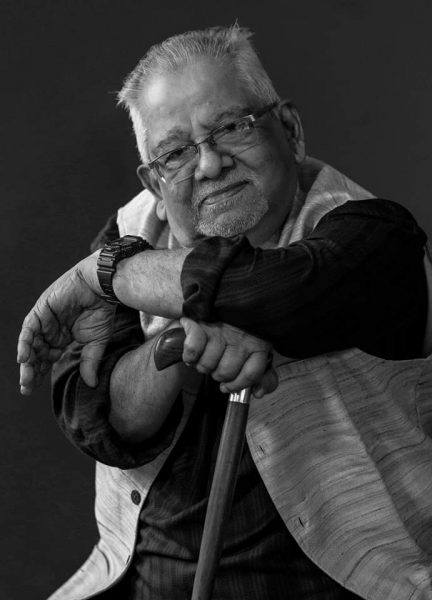 SKS Mani earned the 'Bharati' prefix after acting as Chinnaswami Subramania Iyer, the father of Tamil poet Bharathi, in the film 'Bharathi' (2000).

Renowned Tamil actor and writer Bharati Mani, who made a significant contribution to modern Tamil theatre, passed away on November 16, at his residence in Bengaluru, due to age-related ailments. He was 84.

Born as SKS Mani on September 24, 1937, at Parvathipuram village in Nagercoil, Kanyakumari district, he earned the ‘Bharati’ prefix after acting as Chinnaswami Subramania Iyer, the father of Tamil poet Bharathi, in the film Bharathi (2000). He was fondly called ‘Paattaiya’ since he had a sound knowledge of music.

From a young age, Mani was interested in theatre. He joined ‘Devi Bala Vinodha Sanha’, a drama troupe run by theatre veteran Nawab Rajamanickam Pillai and learnt the skills and art of acting. After completing his education, he moved to New Delhi in 1955 to work at Bharat Electronics.

In a 2012 interview to Thendral, a monthly magazine for Tamils living in North America, Mani said: “In those days, though there were artistes like YG Parthasarathy, Subbudu, Poornam Viswanathan in Delhi, who staged Tamil plays once a year. There was no separate theatre group. So, in 1956, my friends Ramanathan, Ramadoss, Vaithi and I started Dakshina Bharat Natak Sabha (DBNS). Our first play was Sabapathi written by theatre veteran Pammal Sambanda Mudaliyar. We have staged more than 2,000 plays in Mumbai, Kolkata, Chennai, Lucknow and Chandigarh.”

An artist shaped by NSD

The years between 1964 and 1971 were a golden period for students at Delhi’s National School of Drama (NSD). Ibrahim Alkazi, one of the theatre stalwarts, headed the school then. When he started a course for theatre artists, Mani joined it and got introduced to modern plays. He also got trained in voice culture from London School of Drama.

Through his theatre group, he staged plays written by popular writers such as Indira Parthasarathy, Sujatha, Cho Ramasamy, etc.

“We can call Mazhai (by Indira Parthasarathy) the first modern play attempted in Tamil. It was only after the 1980s that modern plays were starting to be staged in Tamil Nadu. But in Delhi, we staged Mazhai in the 1970s. It won awards for best production and direction at national level drama competitions. Writer Sujatha once commented that compared to dramas staged in Chennai, the plays produced in Delhi were technically sound. That was because of NSD training,” Mani said.

After watching one of his dramas Kadavul Vanthirunthar (by Sujatha), Bollywood producer Bobby Baby who has made films like Bandit Queen and Mangal Pandey approached Mani for an English film made for BBC Channel 4.

“The story was written by Arundhati Roy. It was directed by her husband Pradeep Kishan. Titled The Electric Moon, the film was released in 1992,” said Mani.

In 2000, he made an entry into Tamil cinema through the film Bharathi and went on to act in nearly 40 films, mainly as a character artist. Some of his memorable films include Puduppettai, Anniyan, 36 Vayathinile, etc.

A Tamil’s view of TN via Delhi

Having worked in the higher echelons of many public sector units, Mani has literally rubbed shoulders with many in the corridors of power, such as Indira Gandhi, RK Dhawan, Sanjay Gandhi, CN Annadurai, MGR, etc.

Having spent most of his life in Delhi, he had a different view of Tamil Nadu politics which is often seen through the lens of Delhi. Much of his views have been recorded in his two books namely Pulligal Kodugal Kolangal and Paattaiyavin Pazhangathaigal. Particularly, his take on anti-Hindi agitations and the impact they caused is interesting.

“I was in touch with Anna, when he was an MP. He used to stay at a house in South Avenue. I used to fight with him on opposing Hindi. While Kerala, Karnataka, Andhra – the states which were a part of the Dravidian state once – have all learnt Hindi and integrated with the national mainstream, we have been isolated. When we talk with the MPs (of Tamil Nadu) personally, we can understand their difficulties. MPs like OV Alagesan and KS Ramaswamy needed interlocutors. I know how Anna suffered in Delhi because of not knowing Hindi. He always chewed supari soaked in water (so that it is easy to chew). I have said to him at least a hundred times that the soaked supari is called ‘geeli supari’ in Hindi. But he used to forget that. Even MPs like (Dayanidhi) Maran, Raja, Kanimozhi, Tiruchy Siva won’t share their difficulties (of not knowing Hindi),” writes Mani in one of his articles.

In another article, Mani shares his relationship with Prof Balraj Madhok, who co-founded the Bharatiya Jana Sangh (BJS), precursor of the Bharatiya Janata Party in 1951. Mani used to be his student while he was studying at PGDAV College in Delhi.

“Balraj likes Tamil very much. In 1961, he contested in the Lok Sabha elections. He was the chief of the BJS then. We staged a play at that time and introduced him to our Tamil audience. He won that election and the BJS had 35 members in the Lower House under his leadership. This was reduced to two during Vajpayee’s period. He (Balraj) was always the right man in the wrong place. He hated three politicians in his life and they were no other but Nehru, Vajpayee and Advani. In 1973, he was expelled from the party by Advani. After 45 years, Advani was shown the door by Amit Shah and (Narendra) Modi. Madhok run a political party and not a religious mutt,” records Mani.

Mani was the son-in-law of avant garde Tamil writer and critic Ka Naa Subramaniam. His wife Jamuna had passed away many years ago. He is survived by his two daughters and his mortal remains were donated to St John’s Medical College in Bengaluru.

Also read: A day in the life of a Chennai resident – sick and begging for water and medicines