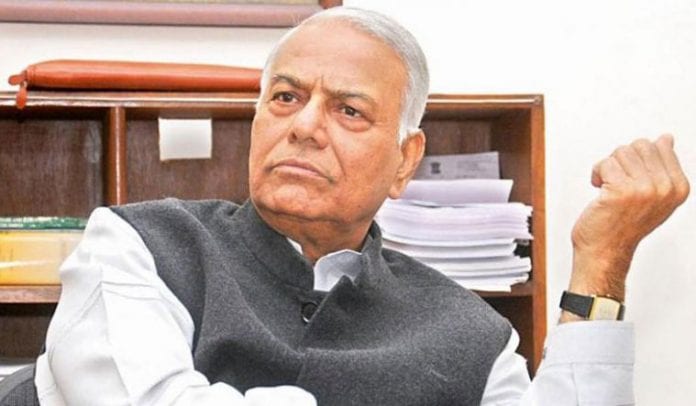 Former Union minister Yashwant Sinha sat on a dharna at the Rajghat on Monday (May 18), demanding that the armed forces be deployed to help migrant workers reach their homes. Sinha was joined by AAP leaders Sanjay Singh and Dilip Pandey who demanded proper arrangements for moving stranded migrant workers back to their states.

They were, however, picked up Delhi Police later in the evening and taken to a nearby police station. “We have just been arrested by the Delhi Police,” Sinha tweeted. There was no immediate comment from the police. Sinha, a former BJP leader and a trenchant critic of the Narendra Modi government, said civilian authorities, be it central or state dispensations, have “failed” migrant workers who have been compelled to walk on roads, with some even dying in the process.

“Our simple demand is that the responsibility be given to the armed forces and paramilitary forces that they should, with all resources at their command and with whatever civilian resources they can commandeer, send these migrant workers to their homes with dignity,” he said. Before being taken into custody by the police, Sinha said he will continue with his dharma until his demands are met.

Rajya Sabha MP Sanjay Singh alleged that the BJP just cares about the rich and it has left the poor to fend for themselves. “The government has no strategy because it has no will to help the migrants. The BJP is an anti-poor government. You can call people from abroad but not help the migrants walking on the streets. The ongoing crisis has proved that,” he said.

AAP MLA Dilip Pandey said the government should show some sensitivity towards the migrants. “The government has capacity to run 20,000 trains daily and ferry 2.3 crore people daily across the country. It should use this capacity to help people,” he said.

AAP leaders later protested against the police decision to break up their dharna and detain them. Sanjay Singh asked if it is a crime to protest for the rights of migrants. The politicians who spread hatred are not arrested by police but those who fight for the rights of poor migrants are taken into custody, Pandey said.