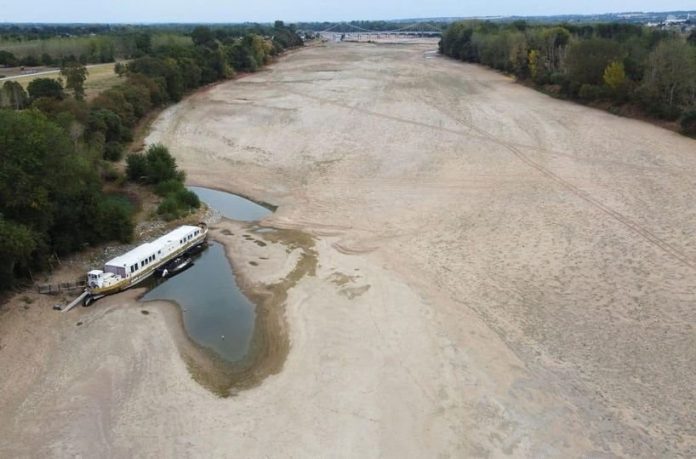 France’s longest river, Loire, can now be crossed on foot, and it has never flowed so slowly. Pic: Twitter

Lack of rainfall and soaring temperatures are drying up rivers in Asia, Europe, the Middle East and the US.

In Europe, France’s longest river – Loire can now be crossed on foot, and it has never flowed so slowly. Rhine, Europe’s second-largest river, is fast becoming impassable to barge traffic. Italy’s longest river Po is two metres lower than normal, crippling crops, and Serbia is dredging the Danube, a report in The Guardian said.

Across Europe, drought is reducing once-mighty rivers to trickles, with potentially dramatic consequences for industry, freight, energy and food production – just as supply shortages and price rises due to Russia’s invasion of Ukraine bite, it added.

Watch: Climate change to blame for extreme heat and flooding in 2022: Study

With no significant rainfall recorded for almost two months across western, central and southern Europe and none forecast in the near future, meteorologists say the drought could become the continent’s worst in more than 500 years.

“We haven’t analysed fully this year’s event because it is still ongoing. There were no other events in the past 500 (years) similar to the drought of 2018. But this year, I think, is worse,” said Andrea Toreti of the European Commission’s Joint Research Centre.

Even some 100 kilometres from where the Loire empties into the Atlantic Ocean, sand banks now stretch as far as the eye can see, large islands connect to the shore and in places people can practically walk from one side of the river to the other, news agency Reuters reported.

“The Loire’s tributaries are completely dried up. It is unprecedented,” said Eric Sauquet, who is head of hydrology at France’s National Institute for Agriculture, Food, and Environment (INRAE).

Many rivers across continents are shrinking in length and breadth. Patches of riverbed poking out above the water are a common sight. Some rivers are so desiccated, that they have become virtually impassable. The human-caused climate crisis is fuelling extreme weather across the globe, which isn’t just impacting rivers, but also the people who rely on them, a CNN report said.

The European Space Agency (ESA) said water levels on the river Rhine have continued to drop owing to soaring temperatures and lack of rainfall, preventing many vessels from navigating through the waters at full capacity.

ESA’s Copernicus Sentinel-2 mission captured part of the Rhine near Cologne, Germany – showing the stark difference between August 2021 and August 2022.

Flowing from the Swiss Alps to the North Sea, the Rhine is an important shipping route for many products from grains to chemicals to coal. When water levels drop, cargo vessels need to sail with reduced load, so they don’t run aground.

Water levels at the chokepoint of Kaub, near Frankfurt, fell to 32 cm in depth, down from 42 cm last week. Ships, however, need around 1.5 m to be able to sail fully loaded making it difficult for larger ships to navigate through the waters. Freight ships continue to sail, but only with around 25% to 35% of the ship’s capacity.

Also read: Here’s how the heatwave can lead to an economic meltdown

The low water levels are emerging earlier than usual, with the lowest water levels typically recorded in September or October. The phenomenon facing the Rhine is common across much of Europe after an unusually hot and dry summer – causing wildfires and water shortages, ESA said.

The Copernicus Sentinel-2 satellites capture high-resolution imagery that provide information about the conditions on Earth, such as plant life, soil and coastal areas. The ESA mission consists of two satellites both of which carry an innovative multispectral imager – a camera that captures optical images over a range of wavelengths beyond visible light.

Humanity is “at a crossroads” when it comes to managing drought and accelerating mitigation must be done “urgently, using every tool we can,” a report from the United Nations Convention to Combat Desertification (UNCCD) said in May.

Through its newly published Drought in Numbers report, the United Nations (UN) said that in 2022, more than 2.3 billion people are facing water stress and almost 160 million children are exposed to severe and prolonged droughts. Since 2000, the number and duration of droughts have risen by 29%.

UN Convention to Combat Desertification (UNCCD) Executive Secretary Ibrahim Thiaw, said that the “facts and figures of this publication all point in the same direction: An upward trajectory in the duration of droughts and the severity of impacts, not only affecting human societies but also the ecological systems upon which the survival of all life depends, including that of our own species”.

“Since 2000, the number and duration of droughts has risen 29%. From 1970 to 2019, weather, climate and water hazards accounted for 50% of disasters and 45% of disaster-related deaths, mostly in developing countries. Droughts represent 15% of natural disasters but took the largest human toll, approximately 650,000 deaths from 1970-2019. From 1998 to 2017, droughts caused global economic losses of roughly USD 124 billion,” the report said.

And up to 216 million people could be forced to migrate by 2050, largely due to drought in combination with other factors including water scarcity, declining crop productivity, sea-level rise, and overpopulation, it added.