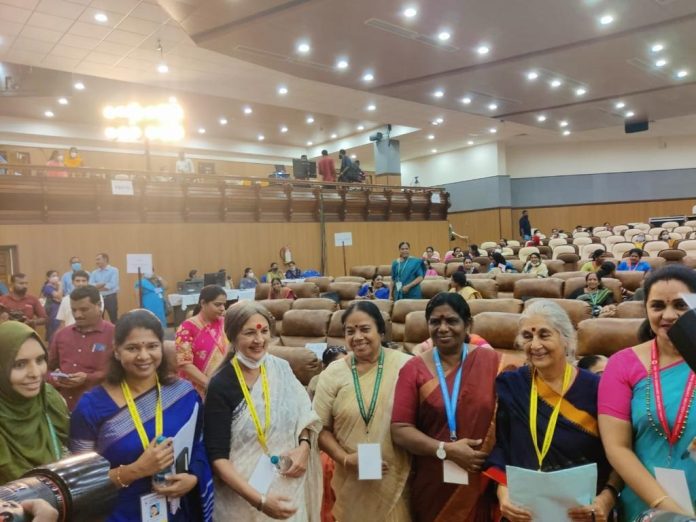 Sexism doesn’t discriminate. It exists as much in the corridors of power — in Parliament and state Assemblies — as it does in offices, educational institutes, film sets and just about any field, going by the recent ‘demand’ of the nation’s women legislators.

The demand came at the National Women Legislators’ Conference held at the Kerala Assembly complex in Thiruvananthapuram. The women legislators sought a “code of conduct” to rein in the sexist behaviour and remarks of male legislators, and called for a Bill to be introduced in Parliament on these lines, said media reports.

The immediate trigger for such a demand came from Maharashtra BJP president Chandrakant Patil’s outburst at NCP leader Supriya Sule. Patil had said that Sule should “go home and cook” after the NCP leader sought to know how Madhya Pradesh managed to get the Supreme Court to allow 14 per cent reservation for OBCs in the local body polls.

CPI(M) politburo member Brinda Karat called Patil’s remark an “insult” in an “entirely sexist male supremacist way”. “Sule just raised a political question. But if she is told by a respected leader that she doesn’t know politics and should go home and cook, what does it mean?” Karat asked. “Let us at least ensure a code of conduct that bans and prohibits sexist comments against women in public life.”

She said there was an excess of sexism in politics and sexist comments were becoming rampant in the country. “They don’t want to fight politically,” Karat said, as quoted by media reports.

Patil has company cutting across party lines. Karnataka Congress leader and former Speaker KR Ramesh Kumar had, in December 2021, said: “When rape is inevitable, lie down and enjoy it.” He later apologised after the comment triggered massive outrage, even from the Congress’s top leaders.

His archrival Mayawati of the BSP came under sharp attack from BJP leader Dayashankar Singh in 2016. “Even a prostitute fulfils her commitment to a man after she is paid. But Mayawati, such a big leader in UP, sells party tickets to anyone who pays her the highest amount,” he had said.

A number of women legislators hailing from the film or TV industry have faced sexist attacks during polls or in House. According to experts, men use sexist words and gestures to reinforce gender stereotypes, discriminatory and exclusionary practices that again reinforce the “superior” identity of men.

“We have to draw the line and it has to be told in no uncertain terms that if males cross this line they will be in trouble,” Karat said. BJP legislators such as Gujarat Speaker Nimaben Acharya were seen applauding Karat’s words, said media reports.

Karat asked DMK MP Kanimozhi Karunanidhi to introduce a Bill in Parliament on these lines.

Kanimozhi responded positively. “I promise you all that I will table a Bill against sexist and derogatory comments against women in public life. It has to be stopped,” Kanimozhi said and sought to widen the scope of the Bill, saying: “It should also include unspeakable abuse spat on women in public life by faceless men on social media.”

“These people should understand that such attacks will only strengthen us. we will also teach you to cook,” she said, as quoted by media reports.

Earlier, Karat had also said that Patil would not have made such a comment had he really known how to cook. Though she was listed as a speaker, Sule could not make it to the conference.