Even as the entire nation is getting excited at the prospect of the great art in the sky, ‘the annular eclipse 2019,’ there are a bunch of scientists and science enthusiasts who seem to be extremely disappointed at a missed opportunity!

If the proposed India-based Neutrino Observatory (INO) at Theni was ready for this spectacular event, valuable data could have been collected. This could have not only given us a better understanding of the science of neutrinos but also put India’s research work on the global map.

INO is a particle physics research project under construction to primarily study atmospheric neutrinos in a 1,200-meter deep cave ((3,900 ft) under INO Peak, near Theni, Tamil Nadu, India. Neutrinos are the smallest particles that form the universe. (A neutrino is a subatomic particle that is very similar to an electron, but has no electrical charge and carries very small mass). However, neutrinos are one of the most abundant subatomic particles in the universe. They are difficult to detect as their interaction with matter is limited.

Also watch: How to watch eclipse with a plastic ball

The INO project is notable in that it is anticipated to provide a precise measurement of neutrino mixing parameters. The project, the idea of which was mooted as early as in 2000 at the Saha Institute of Nuclear Physics, Kolkata, was originally to be completed in 2015 at an estimated cost of ₹1,500 crores (US$209.7 million).

This project was cleared by the Ministry of Environment and Forests (MoEF) and was to come up in the Bodi West Hills Reserved Forest in Theni. It was but caught in a quagmire of complexities and doubt. On completion, the main magnetised iron-calorimeter (ICAL) experiment will include the world’s largest magnet (50,000 tonnes), four times larger than the 12,500-tonne magnet in the Compact Muon Solenoid detector at CERN in Geneva, Switzerland.

Also read: All you need to know about three types of solar eclipses

The idea behind INO was to construct an Iron Calorimeter (ICAL) detector for studying neutrinos, consisting of 50,000 tons of magnetized iron plates arranged in stacks with gaps in between where Resistive Plate Chambers (RPCs) would be inserted as active detectors. The project also envisaged the setting up of an Inter Institutional Centre for High Energy Physics (IICHEP) in Madurai, for the operation and maintenance of the underground laboratory, human resource development and detector R&D along with its applications.

Also watch: Be cautious and enjoy the last spectacle of 2019

Experiments during Eclipses have had many ‘happy’ results. It was the spectroscopy of the chromosphere during a total solar eclipse which established that hydrogen is the most abundant element in the Sun, with helium being the next.

A hundred years ago, Albert Einstein wasn’t a household name. He was a physics teacher in Berlin, known only to scientists and researchers but not to the world. His rise to superstardom began on May 29, 1919, when the Moon and Sun lined up just right for a solar eclipse.

Photos of the astronomical event showed something strange: A few of the stars visible during the blackout were in the ‘wrong place.’ Einstein had foreseen this. Using his theory of general relativity, he made the seemingly crazy bet that the stars’ positions in the sky would shift during an eclipse, and even calculated by how much. Stars moved by exactly the amount general relativity predicted. It was the first experimental evidence for general relativity being on the right track. 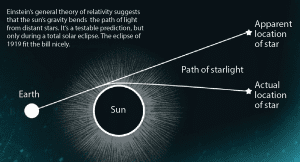 A group of scientists led by Dutch scientists at the European Centre of Excellence for Sustainable Water Technology, Leeuwarden, based on Data collected from about 4 Solar Eclipses (two annular, one total and one partial), were able to establish a correlation between change in water surface tension and the magnitude of the optical coverage during a solar eclipse.

This publication done in 2019 documented that the surface tension of water during four solar eclipse events resulted in an increase between 0.6 and 2.4 mN/m between 20 and 85 min after the maximum eclipse, respectively. This correlation has been established to be independent of environmental parameters like temperature, air pressure, and humidity. The magnitude and times can be correlated to the K-index which reflects the impact of solar activity on Earth.

During one of the eclipses, water evaporation experiments were conducted and showed a temperature-independent reduction of water evaporation at the same time as the surface tension increase was observed. A disruption of the water/air interface by muons ( an elementary particle similar to the electron) which is reduced during a solar eclipse due to blocking of both cosmic radiation and solar wind was presented as working hypothesis in this publication in October 2019.

Also read: People watch in awe and wonder as ring of fire lights up parts of India

The authors have proposed an alternative hypothesis as well which is to propose a novel neutrino/water interaction based on chiral preferences (Objects are chiral when they cannot be superposed on their mirror images. For example, the left and right hands of a human are approximately mirror images of each other but are not their own mirror images, so they are chiral) of water interactions. More studies and theoretical approaches have been called for to further investigate and explain the phenomenon observed.

The path of the annular eclipse this time is through Tamil Nadu covering areas which include Dindigul, Palani, Karur, Ooty, and Coimbatore. If the INO was in place, hypothesis such as the above could have been tested. Of course, the INO has not been necessarily designed for these experiments and in fact has the ability to measure much higher energy.

Is it a missed opportunity?

“When the eclipse happens, the moon comes in between the Earth and the Sun. So, if there is a solar neutrino experiment one could look at the neutrino flux as coming directly from the Sun vs the neutrinos which are actually passing through the moon in this case and one could have looked for tomographic information. But how much that would have resulted in terms of reliable measurement is a different issue but a solar neutrino experiment could have in principle tried such an investigation,” says Dr. Satyanarayan of the INO project.

“Those neutrino experiments that are designed to detect solar or supernova neutrinos could look at possible interaction of neutrinos as they pass through the moon and may be able to study the effect of moon on the neutrino flux if any,” he said.

The next annular eclipse in TN can be observed in the year 2031 in Theni (that is the annular path then as well). Hopefully, by then, our research center in Theni is up and running and as a nation we use the event to celebrate our scientists and science. It will also be a plank to promote science and inspire young minds, especially in rural India. As Carl Sagan said, “Science is more than a body of knowledge. It is a way of thinking; a way of sceptically interrogating the universe with a fine understanding of human fallibility.”

Immunisation and efficacy: The saga of Covaxin