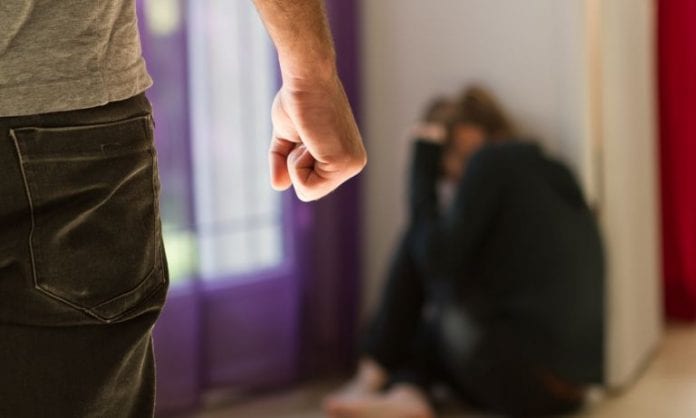 ‘Beat the virus to pulp, not your wife’, ironically reads a poster from the Chamber of Commerce and Industry (IMC) and Laadli, an NGO that works towards protection and empowerment of females.

While the campaign aims to create awareness on the increasing number of domestic violence cases during the lockdown, the messaging comes across not only as insensitive but also awry as it mocks the crime against women.

The poster widely shared on social media has grabbed eyeballs.

Saundarya Rajesh, diversity and inclusion expert, founder of NGO Avtar, wondered if any target group of the poster would respond positively to the ad.

“The weird wording is completely off the mark. The messaging actually reflects many such problematic conversations we have seen as we engage with companies on diversity and inclusion. How often do we come across phrases like, ‘for a single woman, this person is extremely busy’. It actually shows the lack of emotional intelligence or a lack of empathy to perceive such judgments in the receiving end,” she said.

The intent is very honest, to be lauded. But the execution has zero empathy. Wonder who wrote this copy – “Beat the virus to pulp, not your wife”. Was aghast reading this. Which TG will appreciate, more importantly, respond positively (in the way intended by the ad) to this? pic.twitter.com/XQLW3H2Iin

In the comments section, a user asked referring to the ad line, ‘during the lockdown, beat the virus to pulp, not your wife’, if domestic violence was acceptable on other days.

However, the problem is, there are other similar ads too, pointed out S Shakthi, a trustee with The Prajnya Trust, an organisation that works towards generating awareness on gender violence. 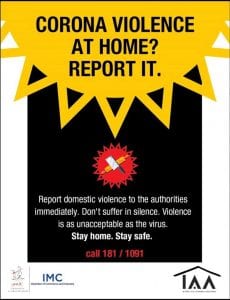 “There is another in the same series that says ‘Corona violence at home? Report it’. It means that domestic violence is wrong only during the lockdown period. It ends up dismissing that there are other factors causing domestic violence and all are unacceptable,” she said.

Such flawed messaging is not new and experts point out that in the past too ad campaigns have misfired largely due to lack of checks at various levels.

In the 1970s, there was an ad for National airlines that came up with a campaign tagline, ‘Hi, I am Cheryl (a real air hostess), Fly Me’.

The sexist ad managed to get a lot of attention and as a result, became a prolonged campaign. Protests from women organisations didn’t deter the campaign and it walked away with honours for sales.

Later in the 2000s, an advertisement for chocolate bar ‘Yorkie, It is not For Girls’ raised eyebrows for its misogynistic one-liner. 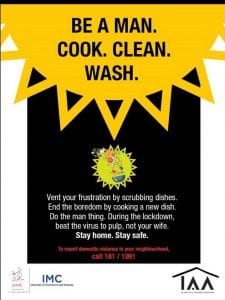 Closer home, more than enough brands of cleaning agents and detergents tie women to domestic chores like cooking, cleaning, and washing. For example, an ad for Vim liquid showed a homemaker not wanting to take up a job because she had a lot of utensils to wash and that kept her occupied all day.

Reverse stereotyping not a solution

With the lockdown bringing out the ugly secret of domestic violence in the open again, it is only logical that we also assess the factors, said Prasanna Gettu, founder, The International Foundation for Crime Prevention and Victim Care (PCVC) that runs a helpline for women facing violence at home.

Increased household chores, stress, and alcoholism can be a few factors behind the domestic violence, she said.

“We have scaled up operations because there are more cases being reported. It would be appropriate to address household chores and family life as a collective responsibility rather than trying to stereotype it,” she added.