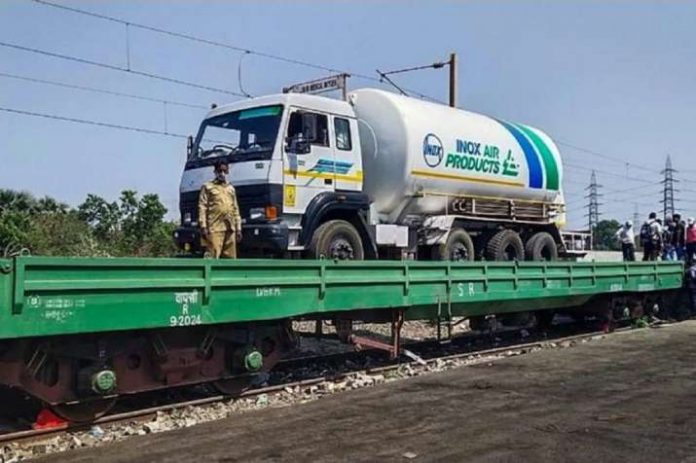 The Oxygen Express had left from Mumbai on April 19 and took five days to return. PTI Photo

The first-ever Oxygen Express delivered the supply to Maharashtra’s three districts — Nagpur, Nashik and Ahmednagar — on Saturday (April 24). However, Shiv Sena MP Arvind Sawant has written to Prime Minister Modi seeking a probe into the train’s delay in reaching the state with the tanker carriers.

The Oxygen Express had left from Mumbai on Monday (April 19) and took five days to return with just about 100 tonnes of medical liquid oxygen. The oxygen was provided by Rashtriya Ispat Nigam Limited (RINL) in Vishakhapatnam.

Sawant said on Friday (April 23) that had the oxygen tankers taken the road route, they would have returned by now. “What kind of a green corridor is this?” he questioned.

The train that left Mumbai on Monday evening around 8 pm took about two-and-a-half days to reach Vishakhapatnam. It reached there on Thursday (April 22) 4.15 am. Later, the tankers were refilled and returned via a train back to Maharashtra.

A statement by the Central Railway said a green corridor had been created by the department for the speedier movement of the tankers. Sawant said it should be probed as to why the train took so much time to reach the destination despite the green corridor. “It took about six days for the oxygen to reach Maharashtra. Why shouldn’t the Railway Minister be held responsible for this?” he questioned.

The MP has demanded resignation of the Railway Minister Piyush Goyal.

Despite having two routes – one from Pune and the other from Nashik – the railways opted for a detour for the train that prolonged the travel time. But, the railways in its statement, has justified the change in route.

“For the movement of Ro-Ro service, Railways had to map the entire route considering the various constraints such as ghat sections, road over bridges, tunnels, curves, platform canopies, overhead equipment, etc. at certain locations,” said the Railways.

The longer route via Vasai was charted as Over Dimensional Cargo (ODC) which is not allowed for travel in the ghat sections over the Mumbai division, the statement said. The tankers have a height of 3320 mm, making it difficult to travel from the two regular routes:

The distance between Kalamboli and Vizag is more than 1,850 km completed by the train in two-and-a-half days.

The railways in its statement also explained that since the trains can run 24 hours a day, but truck drivers need to take halts. The transportation of oxygen is faster through trains for longer routes.

The train reached back Maharashtra on Friday evening (April 23). Out of total 7 tankers, 3 tankers of liquid oxygen were unloaded at the Nagpur railway station on Friday (April 23) at about 8 pm. After that, the train left for Nashik to provide remaining four tankers.

The Oxygen Express reached Nashik around 10.25 am on Saturday (April 24), said the Central Railway statement. Four tankers were unloaded at this station out of which two will be used in Nashik itself while the rest would drive down to Ahmednagar to supply liquid oxygen to the district.

4 Oxygen tankers have been unloaded to provide additional oxygen to the patients.

Under the leadership of PM @NarendraModi ji, Railways continues to serve 🇮🇳 during difficult times. pic.twitter.com/gPRE8OK0RQ

Railways minister Goyal has also tweeted about the Oxygen Express, saying that the Railways has continued its duty under the leadership of Prime Minister Narendra Modi.

According to a report, the state government had sent the nitrogen tankers which weren’t cleaned as per the protocols. Therefore, they had to be cleaned at the plant in Vishakhapatnam before filling them up oxygen.