The final moments, ahead of Chandrayan-2’s lander Vikram losing contact with the Indian Space Research Organisation (ISRO) on Saturday (September 7), is one that could be described as excitement and liveliness giving way to anguish, distress and pain. But Prime Minister Narendra Modi called upon the team not to lose heart and asserted that the country is proud of them.

The atmosphere, initially, displayed a sense of achievement and pride only to be replaced with gloom and melancholy once it became clear that communication with the lander was lost once and for all.

Also read | Chandrayan-2 mission so near yet so far

With the powered descent of the lander beginning at 1:38 am, tension became palpable among the engineers and scientists. The team was glued to their terminals anticipating a soft landing for Vikram. Within minutes, scientists went into a huddle. Isro chairman was seen engaged in an animated discussion with the scientists before coming forward to declare the sad news that communication with the lander was lost.

The mission that was launched on July 22 was very much on track until it lost touch minutes before the crucial landing on the moon in the wee hours of Saturday (September 7). 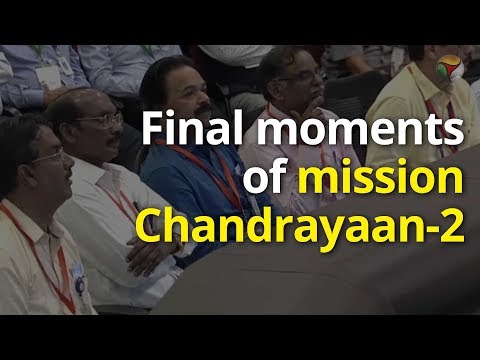 June 29: Rover after completion of all tests integrated with lander Vikram.

July 15: ISRO calls off Chandrayaan-2 launch as a technical snag is observed in launch vehicle system about one hour before blast-off.

August 4: Isro releases the first set of images of the earth captured by Chandrayaan-2 satellite.

August 22: First set of pictures of Moon taken by Chandrayaan-2’s LI4 Camera from an altitude of about 2,650 km from the lunar surface released by Isro.

September 7: Vikram lander begins its powered descent, normal performance was observed up to an altitude of 2.1 km, but loses contact with ground stations minutes before the crucial touchdown on the lunar surface.

To put an end to all the doubts and speculations that were doing the rounds, Isro’s chairman K Sivan announced that Communication from Chandrayaan 2’s Vikram lander to ground station was lost during its powered descent to the lunar surface that the data is being analysed.

“Vikram lander descent was as planned and normal performance was observed up to an altitude of 2.1 km. Subsequently, the communications from lander to ground station was lost,” Sivan said, his voice choking.

“The data is being analysed,” he added.

It is to be noted that the first two parts of the mission namely firing and landing went on smoothly as per schedule. But the third and final part namely landing marred the success of the expedition.

Prime Minister Narendra Modi, who was physically present at the venue walked over to the scientists and told them not to get dejected or disheartened and that the country is proud of them. He said, “I see disappointment on your faces. No need to get dejected. We have learnt a lot. These are moments to be courageous, and courageous we will be! We remain hopeful and will continue working hard on our space programme.”

As he left the Isro office, Prime Minister hugged and consoled K Sivan who was found sobbing.