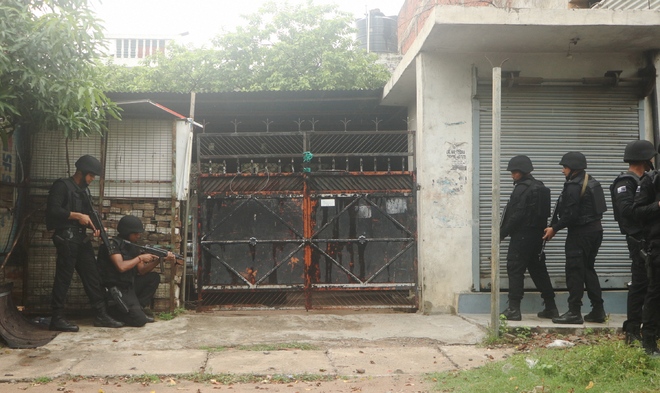 The UP ATS personnel outside a suspect's house in Lucknow. PTI Photo

The Uttar Pradesh Anti-Terrorism Squad on Sunday (July 11) claimed to have unraveled a plot by an Al Qaeda unit to carry out terrorist attacks, including suicide bombings, in crowded areas of the state capital Lucknow and the National Capital Region (NCR), the state police said.

The UP police said the terror activities were being run from Peshawar and Quetta on the Pakistan-Afghanistan border by an Al Qaeda member called Umar Halmandi.

Also read: What India can learn from Bangladesh’s fight against terrorism

This is the third major terror module being busted within a year in the country. In September last year, the National Investigation Agency (NIA) arrested nine Al-Qaeda terrorists in West Bengal and Kerala.

The investigators said that these men were radicalized by Al-Qaeda terrorists on social media and were motivated to undertake attacks at multiple locations in the country.

Senior UP police officer Prashant Kumar said the suspects were planning blasts at important places, memorials and crowded places. “They also planned human bombs before August 15 (Independence Day) in different cities of the state, including Lucknow. For this, they were collecting weapons and explosives,” he said.

The police said they found explosives and a pistol at the home of Minhaj Ahmed, who is in his thirties and lives in Kakori town of Lucknow district.

Another team carried out searches at the home of Maseeruddin, who is aged about 50, in Mariahu town of Jaunpur district and found explosives and a cooker set to be used as a crude bomb.

While Minhaj Ahmed and Maseeruddin were playing key roles for the Al Qaeda unit, the group also had people from Lucknow and Kanpur, the police said.

The Uttar Pradesh ATS is also looking for two associates of Ahmed and Maseeruddin, who escaped just before the two were arrested.

Media reports said the Bihar Police have issued an alert in all districts after the UP arrests.