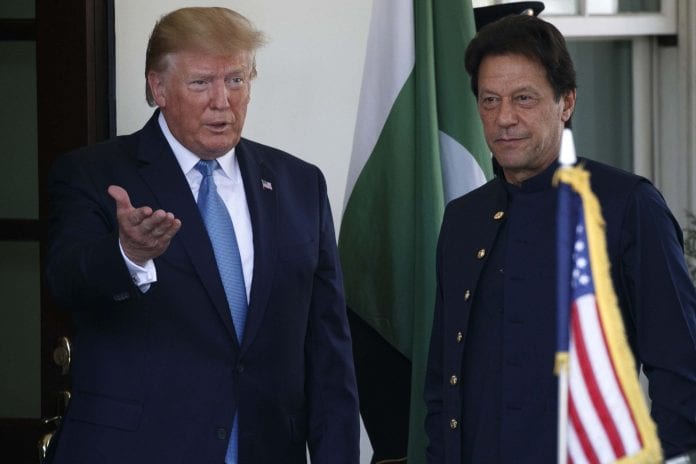 Pakistan Prime Minister Imran Khan, strode into the White House – wearing Peshawari chappals – to a warm welcome by US President Donald Trump on Monday. The Republican leader told a media briefing along with the chairman of Pakistan Tehreek-e-Insaf that Narendra Modi sought his help on the “Kashmir issue.”

Ministry of External Affairs spokesperson, Raveesh Kumar, tweeted, “No such request has been made by PM @narendramodi to US President. It has been India’s consistent position that all outstanding issues with Pakistan are discussed only bilaterally. Any engagement with Pakistan would require an end to cross border terrorism. The Shimla Agreement & the Lahore Declaration provide the basis to resolve all issues between India & Pakistan bilaterally.” This was put out within 60 minutes of the statement issued by Trump.

“When I met him (Modi) two weeks ago, he asked me if I could become a mediator in Kashmir. It’s impossible to believe that two incredible countries with smart leaders can’t solve a problem like that. If I can help in the Kashmir issue, I will help. If I could mediate or arbitrate,” said Trump.

Reacting to the American President’s offer, Congress MP from Thiruvananthapuram, Shashi Tharoor tweeted, “I honestly don’t think Trump has the slightest idea of what he’s talking about. He has either not been briefed or not understood what Modi was saying or what India’s position is on 3rd-party mediation.”

This is not the first time that Trump has offered to mediate India-Pakistan tensions. As the Republican candidate running for the White House, the 73-year-old leader, in an interview to Hindustan Times, said that if necessary, he would love to be the mediator or arbitrator.

However, the Pakistan PM accepted Trump’s offer saying, “Yes, it would be in the benefit of billions of people if you do so to solve the long dispute between the two country.”

Talks between India and Pakistan hit a roadblock after an attack on the Indian Air Force (IAF) base at Pathankot in January of 2016 by Pakistan-based terrorists. Ties were further strained after the IAF attacked militant bases in Balakot after 44 Central Reserve Police Forces (CRPF) were killed in a fidayeen attack by Pakistan-based militants in Pulwama on February 14.

Responding to Donald Trump’s remarks, Jammu and Kashmir’s former CM Omar Abdullah asked if the Centre would call the US president a “liar”.

“Personally I think @realDonaldTrump is talking out of his hat when he says @PMOIndia asked for US involvement in solving the Kashmir issue but I’d like to see @MEAIndia call Trump out on his claim,” tweeted the Jammu & Kashmir National Conference leader and the former Union minister of state for external affairs in the Atal Bihari Vajpayee’s NDA government.

In recent times, the US president has issued warnings to India on “retaliatory tariffs” calling duties “unacceptable.” In a stern message on June 27, Trump had signaled that trade ties between the two countries were fast deteriorating.

However, Trump had on Thursday (July 18) applauded Islamabad in a tweet over the arrest of US and UN-designated terrorist Hafiz Saeed. “The mastermind of the Mumbai Terror attacks had been found after a ten-year search,” he said on the microblogging site.

Meanwhile, Communist Party of India (Marxist) general secretary Sitaram Yechury taunted the PM with a tweet. “What does this say about our long-held position of sovereignty over the Indian state of J&K, as defined in the Shimla Agreement? Will our Twitter-friendly PM have the courage to rebut the US President who has made a public statement?” he asked.

The Shimla Pact signed between Zulfiqar Ali Bhutto and Indira Gandhi in 1972 had reached an agreement that both countries will “settle their differences by peaceful means through bilateral negotiations.”

Another cornerstone of the strained ties between two nuclear armed neighbours has been the Lahore Declaration. Inked between Nawaz Sharif and PM Atal Bihari Vajpayee in 1999, the accord recognises the nuclear dimension of the security environment of the two countries and commits both to the principles and purposes of the Charter of the United Nations, and the universally accepted principles of peaceful co-existence.

From Kohil’s swipe at doubters to Tharoor’s ‘epica...

Census Bureau director to resign amid criticism over data

Guj: 15 migrant workers killed after truck runs over them