Senior advocates have questioned the manner and legality of climate activist Disha Ravi’s arrest and the charges pressed against her and others who’re facing non-bailable warrants for their alleged roles pertaining to a “toolkit” document over the farmers’ protest.

Disha was arrested on Sunday by Delhi Police from Bengaluru while warrants were issued on Monday against Mumbai-based advocate Nikita Jacob and Shantanu, with the police alleging they were the key conspirators in the creation and dissemination of the toolkit.

The police interrogated Jacob last week and seized documents and gadgets from her house. They went to arrest her on Monday, but said she was absconding. Meanwhile, the accused on Monday moved the Bombay High Court seeking interim protection with a pre-arrest bail.

In the case of Disha, the Delhi Police took her from her Bengaluru residence and produced her before Patiala House Court magistrate without allegedly giving her any legal remedy. The court on Sunday remanded her to five-day police custody.

Advocates say that before taking her to Delhi, the Delhi Police ought to have taken transit remand from the local magistrate. In the present case, the police merely informed the local police to take her into custody. As the accused was arrested from outside their jurisdiction, lawyers say transit remand should have been taken.

The Delhi Police, which has framed sedition and conspiracy charges against Disha, took to Twitter to explain their stance and stated she was an editor of the ‘toolkit Google doc’ and that she started a WhatsApp group to amplify its spread.

In this process,they all collaborated with pro Khalistani Poetic Justice Foundation to spread disaffection against the Indian State. She was the one who shared the Toolkit Doc with Greta Thunberg. @HMOIndia @LtGovDelhi @CPDelhi

“She worked closely with them to draft the doc (document). In this process, they all collaborated with the pro-Khalistani Poetic Justice Foundation to spread disaffection against the Indian State. She was the one who shared the Toolkit Doc with Greta Thunberg,” the Delhi police tweeted.

They further alleged that Disha had asked Swedish climate activist Greta Thunberg, who earlier this year extended support to the farmers’ cause, to remove the main document after its incriminating details accidentally got into the public domain.

“This is many times more than the two lines editing that she claims,” the police said after Disha admitted in court she had made just two edits to the document.

Terming Disha’s arrest as “illegal”, senior advocate KV Dhananjaya said the Delhi Police should have taken transit remand from the local magistrate before taking the accused to Delhi. “The victim has the right to legal remedy, but here they denied that to her. This is unbecoming of a justice system in a free country,” he said.

Meanwhile, senior advocate Rebecca Mammen John told The Federal that while Delhi police might not have committed illegality, they are guilty of impropriety and overlooking natural justice and guidance from the court of law.

“Several courts have highlighted the importance and need for transit remand. (The accused) being a resident of Bengaluru, there was no compelling reason for the Delhi Police to whisk her away in a manner they did,” John said.

“If the police are not able to take the transit remand, they need to give compelling reasons. This girl is not a terrorist or part of any terrorist organisation nor was there a law and order situation in the state. So why whisk her away like this?,” John asked.

John pointed to a 2019 Delhi High Court order, which she says clearly states transit orders are a must. “It may not be found in the criminal code of conduct, but various court orders act as a guide as courts too evolved over a period of time.”

Commenting on the arrest, John said while booking someone for sedition, it has to have a direct link to violence and propensity to create violence. “Campaigners across the world create toolkits. The state has better things to do than enter a private chat room and monitor,” she said.

“The increasing invocation of sedition charges against citizens and young people is deeply problematic and troubling,” she said, adding that a robust democracy guarantees right to freedom of expression and the state should not meddle with it.

Bengaluru-based senior human rights advocate BT Venkatesh said there were lapses even with the magistrate remanding her to five-day police custody. He said even if the police had a compelling reason to arrest her, they should have made a submission to the magistrate who should have analysed the rights of legal representation of the accused.

“Police regularly flout these norms and there’s nothing new about it. In this case, the victim did not even have the right to a lawyer and the magistrate should have checked this before remanding her to the five-day police custody and whether there was a compelling need for not having to produce a transit remand order,” said Venkatesh.

On February 4, the cyber-crime cell of the Delhi Police had registered an FIR on the charges of “sedition”, “criminal conspiracy” and “promoting hatred” against the creators of a ‘toolkit’ on farmer protests, after Thunberg shared it on Twitter. Delhi Police had alleged the ‘toolkit’ content indicates a copycat execution of a conspiracy behind the January 26 violence at the Red Fort. “The call was to wage economic, social, cultural, and regional war against India,” the Delhi Police had tweeted.

Who is Disha Ravi?

Climate activist Disha Ravi is one of the early members of the Bengaluru chapter of ‘Fridays For Future (FFF)’, a global movement for climate justice. Supported by Greta Thunberg, FFF has more than 30 chapters across India and has campaigned for environmental protection across the country.

As a college student, Ravi and a few students and young working professionals had spread movements and campaigned for environmental causes.

What is the toolkit in question? 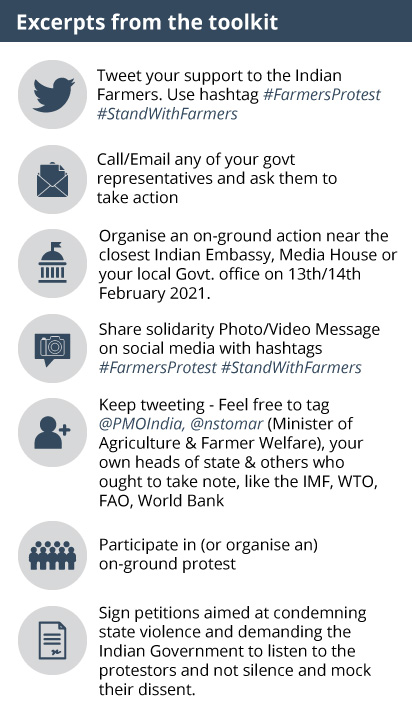 A toolkit, simply put, is a document (word, excel, PDF files) where anyone can share any information. In the present case, the activists collaborated to address the farmers’ issue by providing information about petitions, details about protests, and so on.

On February 3, Thunberg had shared a google document, called a “toolkit” which she later deleted and share another version, a secured document.

The Delhi police caught hold of the google doc and sought the company to share details of the document (IP addresses of those who had contributed to the document, and more).

The toolkit tried to explain the farmers’ protests to those unfamiliar with it, their demands, resources to extend/express one’s support, hashtag campaign information, a plan of action to seek government representatives to take suitable action to repeal the law, et al.