Seven years after the Nirbhaya tragedy pricked the nation’s conscience and brought international attention to the rampant sexual violence in India, little has changed on the ground.

Though the 2012 Nirbhaya case triggered a flurry of legal and policy reforms and prompted the Parliament to pass a new anti-rape act with stringent provisions, there is no improvement in the area of women’s safety. It has been a case of too many laws but too little justice.

I further request @TelanganaDGP to constitute a special team to nab the culprits and file charge sheets in this matter at the earliest to ensure no such incident occurs ever again.
My deepest condolences to her family.

It has been found that the is from Assam. In another similar incident on the same day, a 20-year-old Dalit girl was found hanging in a farmland near Kancheepuram in Tamil Nadu. Preliminary investigations suggested that the girl was raped and murdered.

The string of horrific incidents come as a grim reminder of the pathetic state of affairs. While a few initiatives were taken in some cities in the recent past to improve the safety of women travelling alone, including launching government-funded apps and helplines and rolling out GPS tracking for auto-rickshaw and private cab drivers, the impact has not been encouraging as there is a spike in the number of rapes and murders across the country.

According to a 2018 poll by Thomson Reuters Foundation, India is ranked as the most dangerous country in the world for women. A woman is raped every 15 minutes in India. The official figures don’t represent the full picture.

According to a report of the National Family Health Survey, only 1% of the rape cases are reported and registered.

The sexual assault survivors face several hurdles in seeking justice, starting from social stigma and abuse while registering the cases with the police to trial delays and violence against witnesses. This ordeal traumatises the victim to no end.

The experts have also warned about the gaps in implementation of the legal reforms and the guidelines in attending to survivors of sexual violence.

“Poor utilisation of funds, misguided focus on technologies in place of strengthening of institutions and contradictions in the legal provisions still pose challenges in addressing sexual assaults in India,” says a report in the Indian Journal of Medical Ethics.

The Cyberabad police on Friday (November 29) detained four persons—a truck driver, his assistant and two others—in connection with the rape and murder of the veterinary doctor. 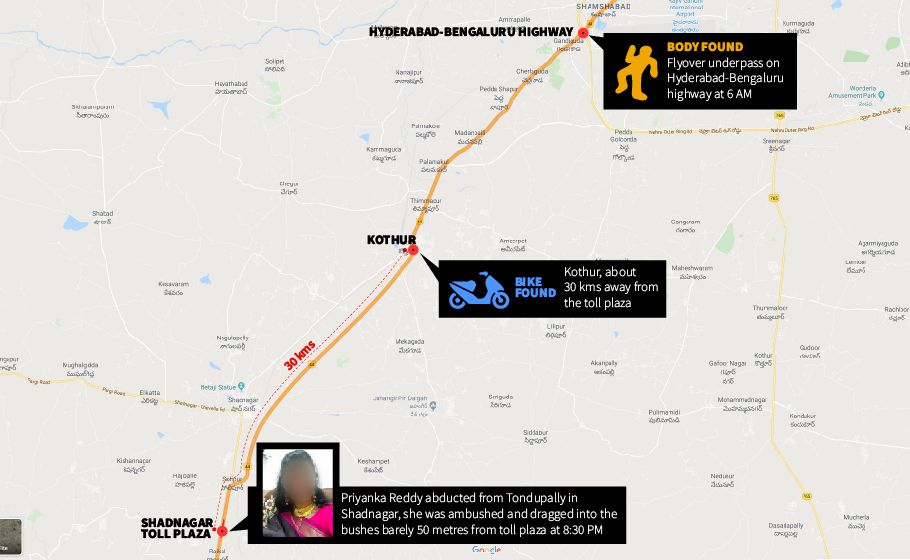 The toll gate at Tondupal in Shadnagar, from where the 27-year-old government doctor was abducted, is a busy locality, about 50 kms from the city. The vehicles taking the national highway towards Kurnool and Bengaluru pass through this toll plaza. The victim parked her two-wheeler near the gate, as has been her regular practice, and took a cab to Gachibowli in the city to consult a dermatologist at a private hospital.

When she returned around 9 pm on Wednesday, she found that her scooter had flat tyres. When two men approached her and offered to get the vehicle repaired, little did she realise that it was a trap. She made a last call to her sister, expressing fear about a suspicious-looking man around parked lorries at the toll plaza.

A milk vendor found the charred body around 6 am near an underpass of a flyover on Hyderabad-Bengaluru highway. He alerted the nearby villagers who informed the police. The victim’s family members, who live in Shamshabad close to the international airport, reached the spot and identified the charred body based on a scarf and a Ganesha locket around the victim’s neck.

Murder of #Priyanka is gruesome&atrocious.
Deeply pained&anguished. #TelanganaPolice will do everything possible at its command to nab the offenders at the earliest&get them convicted through a fast track trial. Anyone, anytime, anywhere in distress, plz #Dial100, knock @ Hawkeye pic.twitter.com/Ck1xewxslg

The victim’s bike was found at Kothur, about 30 kms away from the toll plaza. The police suspect that the killers might have abandoned the vehicle after removing the number plate.

“The CCTV footage of the toll plaza showed that the victim was approached by two men offering to help her. It appears to be a pre-planned rape and murder,” the Deputy Commissioner of Cyberabad police Prakash Reddy said.

“My sister called me at 9.22 pm and said two persons offered to get the vehicle repaired and that she was waiting for them to return. She said she was feeling scared. I asked her to leave the vehicle and take a cab to return home,” the victim’s younger sister said. The victim’s mobile was switched off when the family members tried to reach her.

The police suspect that the killers wrapped her body in a rug, took it near the underpass and set it afire. The woman was first ambushed and dragged into the bushes barely 50 metres from toll plaza, behind a line of trucks that obscured visibility from the road. The police said the victim’s innerwear was found around 100 metres from the spot.

In a shocking remark after the incident, Telangana Home Minister Mahmood Ali asked why the “educated” doctor chose to call her sister, and not the police. “It is unfortunate that she called her sister and not ‘100’, had she called ‘100’ she could have been saved,” the minister was quoted as saying.

Outraged and deeply anguished by the murder of #Priyankareddy I am confident that @TelanganaDGP & the police will catch the animals who committed this heinous crime & deliver justice at the earliest. I’ll personally monitor the case too. Anyone in distress, please dial 100 🙏 🙏

According to data released by the National Crime Records Bureau (NCRB) last month, the crimes against women in Telangana rose by 13.96% in 2017.

With over 94 women out of every one lakh in the state becoming victims of crime, Telangana accounts for 4.9% of the total crimes committed against women across the country.

The NCRB figures show that in Telangana as many as 81 of the offences were committed by family members while in 195 cases, the accused were friends, neighbours, employers or other persons known to the victim, and in the majority of cases — 254 — the accused were friends whom the victim met online or live-in partners. As many as 1,620 cases were registered under the Protection of Children from Sexual Violence Act.

Utterly shocked to know the gruesome killing of #PriyankaReddy in Hyderabad. It is beyond my imagination to think about what this young girl could have faced. This incident is the culmination of insensitivity and bestiality. My thoughts and prayers are with the bereaved family.

The Kerala police have arrested the accused who was reportedly known to the victim. After sexually assaulting her, he smashed her face beyond recognition.

“Ali dragged the victim to an isolated place near the apartment complex. He tried to sexually abuse her. When the victim resisted, she was attacked multiple times and raped. The victim sustained grievous injuries on her face and head and died due to blood loss. Her body was found lying in a pool of blood at around 5:30 am by a shopkeeper,” NDTV reported.

Based on CCTV inputs, the accused was identified and tracked down by the police. A police team has been sent to Assam to verify the criminal antecedents of the accused.

The victim hailed from Karuppumpadi in Ernakulam district and was living alone in Perumbavoor, an industrial hub and home to a large number of migrant labourers, mostly from Northeast India. Kerala is home to around 30 lakh migrant labourers.

I'm shocked to hear about the brutal rape & murder of #DrPriyankaReddy in Hyderabad. How anyone could subject another human being to such terrible, unprovoked violence is beyond imagination. My thoughts & prayers are with the victim's family at this time of immense grief.

What do the statistics reveal?

About 1,537 cases have been reported till September this year. Malappuram district accounted for highest number of rape cases this year with 150 cases being reported so far.

In 2017, the two sisters, aged 13 and nine, were found dead in two separate incidents in Walayar, Palakkad. While the elder girl was found hanging in her house on January 13, her sister was found dead 52 days later. Their post-mortem report had revealed they were sexually assaulted. The case had triggered a storm of protests with civil society organisations and Opposition parties alleging tardy police investigation and political interference in the case. 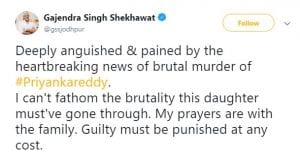 The Dalit girl went missing on November 21 from Aandi Siruvallur village in Kancheepuram district. On Thursday, police received information that her body was found hanging at a farmland, about 2 kms from her house.

“The body had stab and burn injuries,” the police said.

When there was no further contact, the family members filed a police complaint. “Preliminary investigations suggest that it could have been a rape and murder. However, only an autopsy report can confirm it,” the police said.

Meanwhile, the police have detained Rajesh and are interrogating him.

72 people of unknown nationalities get Indian passports with Telanga...

Telangana minister worries about son’s privacy in talks with M...