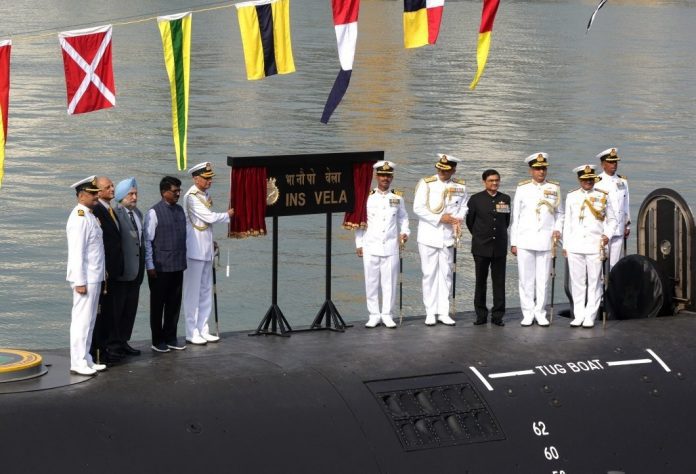 The Navy Chief said Project 75 will transform Indian Navy’s war-fighting in the underwater domain in the years to come.

Adding teeth to India’s naval prowess, the Navy commissioned submarine INS Vela in Mumbai on Thursday. Chief of Naval Staff Admiral Karambir Singh called it a “potent platform” with an ability to undertake the entire spectrum of submarine operations.

This is the fourth of six submarines the Indian Navy is inducting under the Kalvari class submarine Project 75.

This is also the second major induction in the Indian Navy in less than a week. On November 21, the navy commissioned warship INS Visakhapatnam.

Speaking at the commissioning event, the Navy Chief said Project 75 will transform Indian Navy’s war-fighting in the underwater domain in the years to come.

“INS Vela is a potent platform with an ability to undertake the entire spectrum of submarine operations. And given today’s dynamic and complex security situation, INS Vela’s capability and fire power will play a crucial role in the Navy’s ability to protect, promote and preserve India’s maritime interests across the seascape of the Indian Ocean Region while acting as a clear deterrent to our adversaries,” Singh said.

The Scorpene class submarines are being built in India by Mazagon Dock Shipbuilders Limited (MDL) Mumbai, in collaboration with France’s Naval Group.

INS Vela would form a part of the Western Naval Command’s submarine fleet and would be another potent part of its arsenal.

The crew of the erstwhile Vela, a Russian origin Foxtrot class submarine, which was decommissioned in 2009, was also present among guests on this occasion.

“These Scorpene submarines are extremely potent platforms, they have advanced stealth features, and are equipped with both long-range guided torpedoes as well as anti-ship missiles,” the Navy said.

The submarines have a state-of-the-art SONAR and sensor suite, permitting outstanding operational capabilities. They also have an advanced Permanent Magnetic Synchronous motor (PERMASYN) as its propulsion motor.

“INS Vela is fitted with advanced weapons and sensors. All of these are integrated into the Submarine Tactical Integrated Combat System known as SUBTICS,” the Navy said.

Once a target is classified, the submarine may choose to engage it using either her sea skimming missiles also known as Flying Fish or heavyweight wire-guided torpedoes.

The submarine’s mascot is Sub-ray, which is an amalgamation of the submarine and the stingray.

The stingray is known for stealth, aggression and offensive power. Its flat body allows it to sit at the bottom of the ocean, camouflage itself to predators swimming above as it lurks for its prey underneath.

Singh said that INS Vela showcases India’s notable strides in indigenous submarine construction as also the journey from being a “buyer’s navy to a builder’s navy”.

While Project 75 has been an important step in enhancing the Navy’s capability, Singh said that it is simultaneously progressing with Project 75 India under a strategic partnership model.

Project 75 India aims to develop all facets of the submarine construction ecosystem within the nation and also involves transfer of several niche technologies.

In June, the Defence Acquisition Council, headed by Defence Minister Rajnath Singh, approved issue of RFP for construction of six conventional submarines under Project 75 (I) under the Strategic Partnership (SP) Model.

The Navy Chief said that the project would significantly enhance India’s ability to work with cutting-edge defence manufacturing technologies with implications not only for the Navy but also for the nation.

INS Vela carries forward the legacy of her namesake Foxtrot-type submarine, acquired from Soviet Russia in 1973, which served the Navy for 37 years. Rear Admiral (Retd) JMS Sodhi, the Commissioning Commanding Officer of the earlier INS Vela, was also present at the event.