Playback singer SP Balasubrahmayam, fondly known as SPB, is 90 percent out of sedation and is doing well, his son SP Charan said on Tuesday (August 25).

“I had a conversation with my doctors today, and everything seems normal. As I had said yesterday, he is responding. He is 90 percent out of sedation and he is doing well. He is responding to the doctors and the treatment,” SP Charan said in a video message on social media.

“I cannot say enough that we, as a family, are very grateful for the love and affection and the prayers that have come my father’s way,” he added.

“Thank you all again. Let’s keep praying, and hopefully, we will see father as early as possible. It is a good day for everybody who are following my updates and expecting my father’s speedy recovery,” he said.

He also explained why he was posting updates on his father’s health in English and not any other regional language like Tamil or Telugu. “Having said that, I just want to make one point. There have been a lot of people asking me to put up these posts in Tamil. The reason why I choose to speak in English is because Dad has a lot of fans all over the country for me to put up updates in Tamil, Telugu, Hindi, Kannada, Malayalam or all the other languages that he has sung in. It would be very time-consuming for me,” he said.

He appealed to people to explain his messages to those who could not understand what he was saying in English. “I am in between prayers and talking to doctors and putting up updates for all his fans. So please understand, if there are people who don’t understand what I’m trying to say, please explain it those people, what I am saying, so the news will spread, and the positivity wil also spread.” 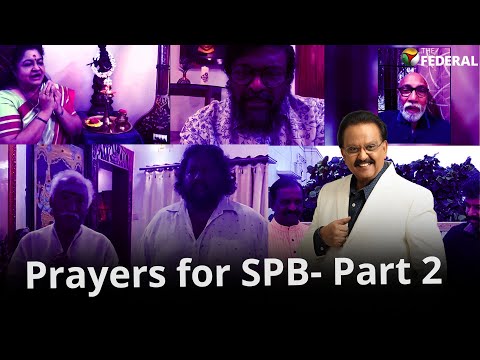 He concluded the message by thanking everyone once again: “Thank you again and have a very good evening.”

SPB was admitted to the hospital on August 5 after he tested positive for COVID-19. According to the hospital’s statement on August 14, he was in critical condition that day and was on ventilator support.

He was also placed on Extracorporeal Membrane Oxygenation (ECMO) support, which is a heart-lung assistance machine. His condition has improved since then, according to MGM Healthcare.

People across the country, and even some parts of the world have been praying for the singer’s recovery, with wishes pouring in.