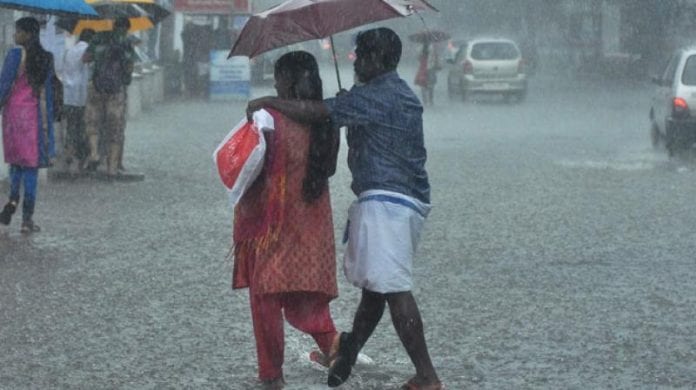 The monsoon this year is likely to be normal in the country, says the India Meteorological Department. PTI File Photo

The southwest monsoon made its date with Kerala on June 3 after a delay of two days, the India Meteorological Department said, marking the start of the four-month rainy season in the country.

“The southwest monsoon has made an onset over southern parts of Kerala,” IMD Director General Mrutunjay Mohapatra told PTI. Releasing its second long range forecast for southwest monsoon on Tuesday (June 1), the weather office said it is likely to be normal in north and south India, above-normal in central India and below-normal in east and northeast India.

Overall, the monsoon this year is likely to be normal in the country, said Mohapatra.

Kerala has been receiving heavy rains intermittently since Cyclone Tauktae hit the west coast in mid-May. Cyclone Yaas hit Odisha and West Bengal last week. However, these rains do not qualify as monsoon rains. They can at best be called pre-monsoon showers.

Mohapatra said for the rains to be called monsoon rains, at least 60 per cent of the weather stations at Minicoy, Amini, Thiruvananthapuram, Punalur, Kollam, Alappuzha, Kottayam, Kochi, Thrissur, Kozhikode, Thalassery, Kannur, Kudlu and Mangalore should report 2.5 mm or more rainfall for two days in a row. In addition, the wind speed, depth of westerlies and the Outgoing Longwave Radiation have to meet the set standards.

There is no clear view among the scientific community so far about the likely impact of the two recent cyclones (Tauktae and Yaas) on monsoon winds this year. Mahesh Palawat, vice-president Skymet Weather, a private organisation, said on May 26: “Yaas has actually helped pull the monsoon current head in the Arabian Sea. There was heavy to very heavy rain reported in many parts of Kerala in the last 24 hours so we are expecting monsoon to arrive early.”

The northeastern states of Assam, Sikkim and Meghalaya are likely to get widespread rain. Heavy to very heavy rains are likely at isolated places in Nagaland, Manipur, Mizoram and Tripura.

However, maximum temperatures are likely to remain above 40 degree C in Rajasthan, Gujarat and isolated places of Uttar Pradesh, Punjab, Haryana, Madhya Pradesh and Tamil Nadu.

Part 3: Why the old wine in new bottle smells stale