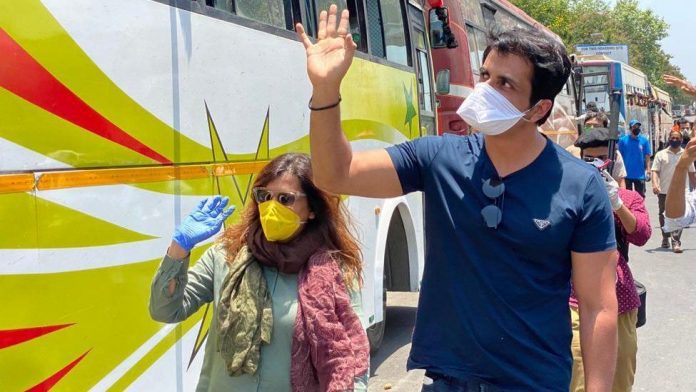 Fallen from grace? Sonu Sood was regarded as a messiah by migrant labourers during the COVID-19 pandemic

Actor Sonu Sood, who was regarded as a messiah by migrant labourers in the country during the COVID-19 pandemic, has landed in big trouble with the income tax department accusing him of evading taxes to the tune of over ₹ 20 crore.

The Income Tax department issued a statement on Saturday (September 18) to this effect.

The department, which had searched the actor’s Mumbai home for three days in a row, claimed to have found incriminating evidence of tax evasion. What is worse is that they alleged that Sood, who had taken collected funds under his charity foundation, had spent just ₹1.9 crore on relief work and left the balance ₹17 crore lying unused in his non-profit’s bank account.

Sood, 48, who was last seen in a prominent role as a villain in Ranveer Singh’s super hit film 2018 ‘Simmba’ and has a slew of films lined up for release, had recently taken the plunge into politics and announced a tie-up with Delhi Chief Minister Arvind Kejriwal’s Aam Aadmi Party government.

In fact, the ruling Shiv Sena in Maharashtra and the Aam Aadmi Party have questioned the timing of the tax raid at Sonu Sood’s home.

According to the tax department, Sood’s non-profit foundation had also raised ₹2.1 crore from overseas donors using a crowdfunding platform, which was violating the rules laid down by the Foreign Contribution (Regulation) Act, said a NDTV report.

Further, the tax department described the modus operandi used by the actor to evade tax. The actor allegedly used to “route his unaccounted income in the form of bogus unsecured loans from many bogus entities,” the tax department said in the statement.

In their investigations, the tax department found so far 20 such entries, and the providers have accepted that they had given bogus accommodation entries. They have also confessed issuing cheques in lieu of cash, added the tax department.

“There have been instances where professional receipts have been camouflaged as loans in the books of accounts for the purpose of evasion of tax. It has also been revealed that these bogus loans have been used for making investments and acquiring properties. The total amount of tax evaded unearthed so far, amounts to more than ₹20 crore,” the tax department said, the NDTV report added.

Also, the IT department made a damning allegation that the non-profit Sood Charity Foundation, which was formed in July last year during the COVID first wave had collected donations of over ₹18 crore till April this year. Out of this total collection, only ₹1.9 crore has been spent on relief work and the balance ₹ 17 crore has been lying unused in the non-profit’s bank account.

Media reports said that this operation by the tax department was triggered when allegations of tax evasion in a recent deal between Sonu Sood’s company and a Lucknow-based real estate firm had surfaced. The actor had reportedly invested substantial funds in a joint venture for a real estate project.

The tax department statement said that they had carried out simultaneous search operations at various premises of an infrastructure group in Lucknow and had “unearthed incriminating evidences pertaining to tax evasion and irregularities in the books of account”.

The department alleged the Lucknow group is involved in bogus billing of subcontracting expenses and diverting funds. “Evidences of such bogus contracts found so far are to the tune of over ₹ 65 crore…Further investigations are being carried out to establish the full extent of tax evasion. Cash of ₹1.8 crore has been seized during the course of the search,” the tax department said.

Further investigations are being carried out to establish the full extent of tax evasion, said the income tax department, said media reports.

A total of 28 premises in Mumbai, Lucknow, Kanpur, Jaipur, Delhi, and Gurgaon are being covered as part of the search operation.

Meanwhile, BJP has said there is no link between Sood’s tie-up with AAP and the searches.