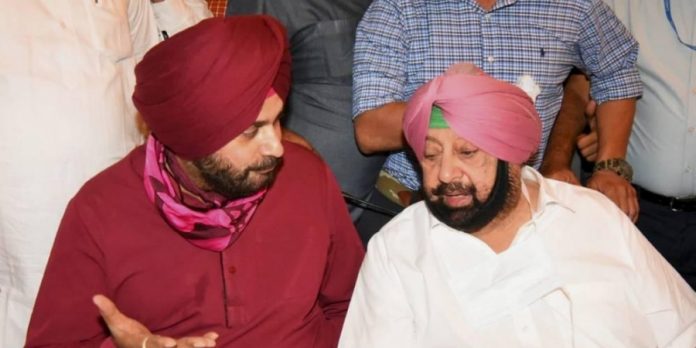 The Sidhu-CM meeting on July 23 came after months of turmoil in the Punjab Congress. PTI Photo

The newly appointed party chief, who takes over the top party post from Sunil Jakhar, had reached out to Singh on July 22 with an invite for his installation ceremony along with those of refurbished Congress committee members.

The CM gave his nod as two of the newly appointed working presidents, Kuljit Singh Nagra and Sangat Singh Gilzian, reached his residence carrying a letter signed by 56 MLAs, including Sidhu, who represents Amritsar East in the 117-member Assembly.

“I have no personal agenda, only the pro-people agenda. Thus, as the eldest of our Punjab Congress family, I request you to please come and bless the new team of PCC,” Sidhu wrote to the CM, who had earlier insisted on a public apology from Sidhu for his outbursts, but got none.

On July 23, the CM arrived at Punjab Bhawan in Chandigarh a few minutes after Sidhu for the ‘tea party’ ahead of Sindhu’s formal appointment.

During the function, Sidhu was seen getting up from his chair, warming up with a batting move he displayed during his time as a cricket player as he headed towards the dais to address party workers in the presence of Amarinder Singh.

“There is no difference between an ordinary party worker and the state unit chief. Every Congress worker in Punjab has become the chief of the party’s state unit from today,” said Sidhu after taking charge at the state Congress headquarters.

“I will work shoulder-to-shoulder with you. I have no ego…The Congress is united today, contrary to what our opposition is saying,” said Sidhu. “Those who oppose me improve, me,” he said in a hint of his rivalry with the CM.

The new state Congress chief sought to put the bitter past behind him. “My fights are not the issue. The farmers sitting in Delhi, the problems of doctors and nurses…these are the real issues,” he said. “We have to resolve the issues, then we are true before god.”

Speaking at the installation ceremony earlier, Chief Minister Amarinder Singh said he was fighting at the border when Sidhu was born. He targeted the Aam Admi Party, which is said to be gaining ground in the state. “I have no faith in AAP…There are reports that they have some dealings with Pakistan,” NDTV quoted him as saying.

Speaking to reporters outside the Punjab Bhawan, Congress MLA Pargat Singh said Sidhu met the CM over tea in the presence of Rawat. The two leaders sat next to each other and the meeting between them was cordial, he added.

This was the first time in nearly four months that Sidhu and Singh met each other. The chief minister’s media adviser tweeted pictures of the two leaders having a chat.

The July 23 meeting was in sharp contrast to the July 21 events, when Sidhu had managed to put together a group of 62 of the 77 party MLAs inside the Golden Temple in Amritsar in a show of strength.

The truce in the Punjab Congress comes months ahead of the Assembly polls and marks an end to the episodic turmoil in the party that has a huge majority in the House – 77.

The Friday bonhomie is the result of several rounds of talks the two sides had with the Gandhis over the months. Sidhu has insisted on strong government action in the sacrilege cases of 2015, a less of bureaucratic say in the loan waiver schemes, and more vigorous implementation of various government schemes.