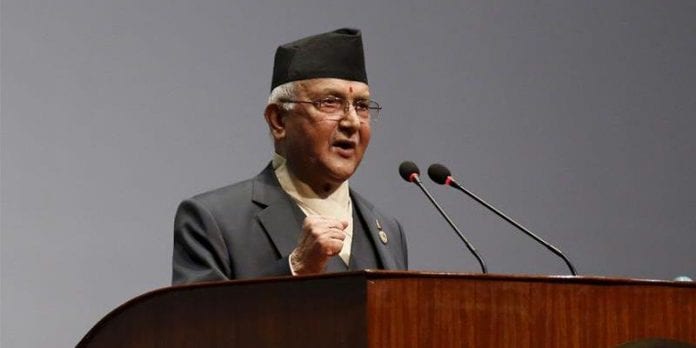 Shiv Sena on Wednesday (July 15) slammed Nepal Prime Minister K.P. Sharma Oli for his remark that the “real” Ayodhya lies in Nepal, not in India.

The Shiv Sena in its party mouthpiece, Saamana, said that he may even claim that Mughal emperor Babur was a Nepalese and that lord Ram belongs to the entire world, but Ayodhya, where the God was born, belongs only to India.

Terming Oli as a puppet in the hands of China, it said he has forgotten the religious and cultural ties between India and Nepal as he has got close to the Chinese Dragon.

Oli on Monday claimed the “real” Ayodhya lies in Nepal, not in India and that Lord Ram was born in Thori in southern Nepal. Several top Nepalese political leaders from different parties slammed Oli and asked him to withdraw his controversial statement.

Referring to Oli’s remarks, the Shiv Sena said there are descriptions in puranas (ancient scriptures) that the Saryu river flows from near Ayodhya in Uttar Pradesh and not Nepal.

The same Saryu had turned red with the blood of kar sevaks who fought for the Ram temple cause, but Oli, who has become a slave of the Chinese, has got nothing to do with it
now, the Uddhav Thackeray-led party said.

“Today, he has claimed Ayodhya and Lord Ram are Nepalese. Tomorrow, he will claim Babur also as being a Nepalese. Lord Ram belongs to the entire world, but the Ram janmabhoomi Ayodhya belongs only to India, it said.

The Shiv Sena charged Oli with taking anti-India positions at the behest of China. It accused him of surrendering Nepal and the Hindu culture in the Himalayan nation before China. “Had Lord Ram been in Nepal today, like he had killed Ravana and destroyed sins, he would have done the same thing in case of ‘Hindudrohi’ (Hindu-treacherous) Oli,” it said.

The fight for Lord Ram’s birthplace in Ayodhya has been going on for at least 70 to 75 years, the Marathi daily said, wondering why Oli took so much time to give evidence of
the Lord belonging to Nepal.

Further ridiculing Oli’s remark, the Shiv Sena in sarcastic remarks said his ancestors hoodwinked even Babur, who wanted to bring down the Ram temple to build a mosque in
place of it, by diverting the Mughal emperor to North India instead of Nepal.

Nepal on Tuesday (July 14) clarified that PM Oli’s remarks were not aimed at undermining any faith or community and that the place and characters in Ramayana should be researched further.