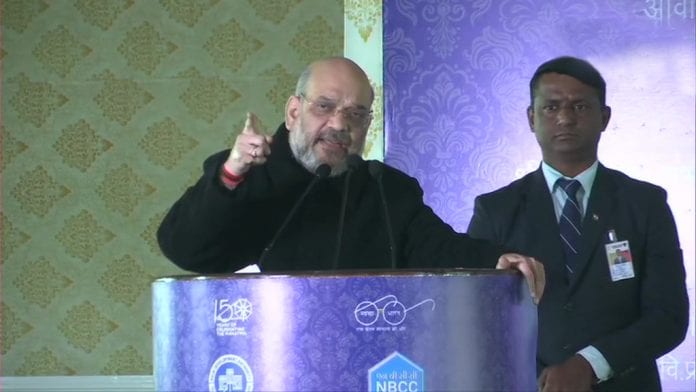 Accusing the opposition of creating confusion over the Citizenship Amendment Act (CAA), Union Home Minister Amit Shah on Thursday (December 26) blamed them for spoiling the atmosphere in the national capital by misleading the people.

“The Congress-led tukde-tukde gang is responsible for spoiling the peaceful atmosphere in Delhi. The time has come to punish them. Delhi people should do it,” the Home Minster said while addressing an event organised by the Delhi Development Authority (DDA).

Shah said the time was up for the Kejriwal government in Delhi and the BJP will form the next government in the national capital.

On the recent anti-CAA protests, some of which turned violent in areas like the Jamia Millia University and Seelampur, Shah said, “The opposition led by the Congress created confusion about the Citizenship Amendment Act. By misleading people on the CAA, the opposition spoiled the peaceful atmosphere of Delhi.”

Exuding confidence about the BJPs performance in the national capital, he said time is up for the Aam Aadmi Party (AAP) government in Delhi and “lotus will bloom”. “Delhi, you gave (us) all seven BJP MPs, now time to give BJP MLAs (a chance) in the next polls for development of the national capital,” Shah said.

Taking on Kejriwal, he said the AAP dispensation obstructed Centre’s schemes. “Kejriwal has not implemented the Pradhan Mantri Awas Yojana and Ayushman Bharat. He only wants to put his name on our pet projects,” Shah said.

Further, he blamed the Congress for misleading the people on the Citizenship Amendment Act, which grants citizenship to individuals who are Hindu, Sikh, Buddhist, Christian, Jain, or Parsi who entered India from Pakistan, Bangladesh, or Afghanistan by the cut-off date of December 31, 2014.

“CAA was discussed in the Parliament. Nobody said anything… Once they were out (of Parliament), they started misleading people,” the Home Minister added.

It is to be noted that, Delhi will go to polls early next year.