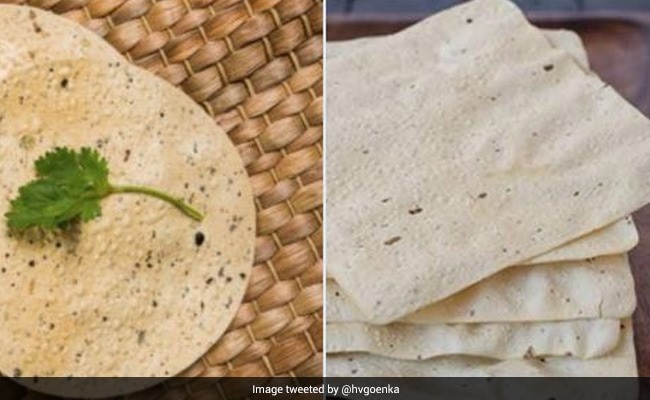 Harsh Goenka had tweeted this picture of a round and square papad and asked what he thought was a clever question. Pic: Tweeted by @hvgoenka

The chairman of RPG Enterprises, Harsh Goenka found himself as a square peg in a round hole when he stirred up a lot of hullabaloo on Twitter by posing what he thought was a clever question: why a square papad attracts GST and a round papad does not?

Besides receiving a strong dose of papad philosophy on why this could be so and papad trivia from his many followers, Goenka was corrected by the central government indirect tax agency itself who tweeted that whatever its shape or name, the papad is exempted from GST.

Goenka, who had probably fallen prey to fake news, had the wrong information to begin with. He had tweeted along with pictures of square and round papads, “Did you know that a round papad is exempt from GST and a square papad attracts GST?” , NDTV reported. He then went to ask his 1.6 million followers if anyone could suggest a good chartered accountant who could make him understand the logic?

Did you know that a round papad is exempt from GST and a square papad attracts GST ? Can anyone suggest a good chartered accountant who can make me understand the logic? pic.twitter.com/tlu159AdIJ

When former journalist and media celebrity, Pritish Nandy asked him where he had got this “brilliant” information from, Goenka replied that he got it from a “friend”.

But the Central Board of Indirect Taxes and Customs, which is responsible for indirect taxation in the country, was not amused. Without being invited to do so, the government organisation couched the clarification in official terms on its Twitter handle to set the record straight that ‘papad, by whatever name known, is exempt from GST vide Entry No. 96 of GST notification No.2/2017-CT(R)’.

‘This entry does not distinguish based on the shape of papad. This notification is available at http://cbic.gov.in,’ read the Twitter post.

Papad, by whatever name known, is exempt from GST vide Entry No. 96 of GST notification No.2/2017-CT(R). This entry does not distinguish based on the shape of papad. This notification is available at https://t.co/ckIfjzg8hw https://t.co/19GbQJvYZe

To this response, many twitter users praised the indirect taxation agency for clarifying the matter which had dominated Twitter, and one user even requested that they should show the same enthusiasm when it comes to a common man’s queries.

The Goods and Services Tax or GST, which was implemented in July 2017 is a destination based tax on consumption of goods and services. It eplaced a whole host of excise duties, service tax, surcharges and cesses, sales tax, state value added tax (VAT) and other taxes with one single tax. The GST is applicable on all goods and services except on alcoholic beverages and petroleum products.