Hours after international figures like Rihanna and Greta Thunberg expressed their solidarity with the Indian farmers protesting against the agriculture laws, the government on Wednesday (February 3) called “sensational” comments by celebrities inaccurate and asked them to check facts and understand the issue before commenting.

In a statement, the Ministry of External Affairs said the protests against the farm reforms are being raised by “a very small section of farmers in parts of India” and talks with them are underway to resolve the issue.

“We would like to emphasise that these protests must be seen in the context of India’s democratic ethos and polity, and the efforts of the government and concerned farmer groups to resolve the impasse,” the statement read.

“Before rushing to comment on such matters, we would urge that the facts be ascertained, and a proper understanding of the issues at hand be undertaken. The temptation of sensationalist social media hashtags and comments, especially when resorted to by celebrities and others, is neither accurate nor responsible,” the ministry said. 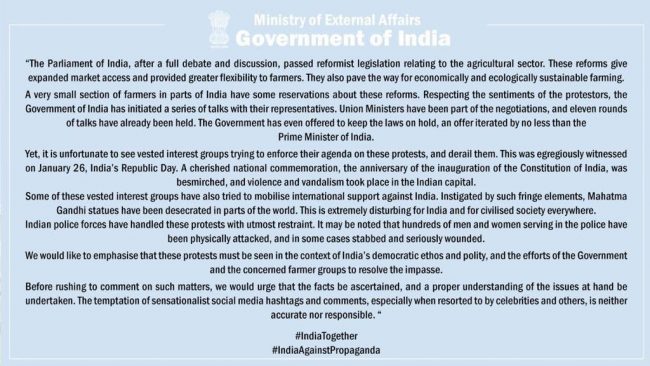 Calling the protest a tool by “vested interest groups” to enforce their agenda, the government said these groups have tried to mobilise international support against India to reach their goal.

“Instigated by such fringe elements, Mahatma Gandhi statues have been desecrated in parts of the world. This is extremely disturbing for India and for civilized society elsewhere,” the statement read.

The government also mentioned that hundreds of police officers, both men and women, have been physically attacked, some of them severely injured while handling these protests.

In a bid to clarify the ‘outsiders’ on the law and its premise, the statement began with the reforms that the farm laws would bring, stressing that the legislations were duly passed “after a full debate and discussion” in Parliament.

The ministry’s statement had the hashtags of #IndiaTogether and #IndiaAgainstPropaganda, an apparent answer to #farmersprotest trending on Twitter.

Twitter trended with the hashtag #IT Cell soon after the ministry’s statement was released, with many accusing it to be a wing of the BJP IT cell.

Thousands of farmers have been camping at the borders of the national capital since November 2020 against the Centre’s farm laws.

While the farmers have demanded a repeal of the three contentious laws, 11 rounds of talks between farmers’ representatives and the government have not broken the stalemate.

In the aftermath of violence, especially in the Red Fort during a farmers’ tractor rally on Republic Day, the government has put strict protocols in place. Barricades have been built and nails embedded on roads to prevent the protesting farmers at the borders to enter the national capital.

The Centre on Tuesday also clarified in the Parliament that it wouldn’t provide compensation to families of farmers who died during the protest at Delhi.

When asked if the government knew that many farmers protesters have died or fallen ill during the agitation, Agriculture Minister Narendra Tomar said the government has urged farmers’ representatives many a time to send children and elders including women home in view of the cold and COVID-19 situation.