In a bid to enhance transparency and obviate the need to seek details under the Right to Information Act (RTI Act), the Reserve Bank of India (RBI) has started making public minutes of its board meetings. However, the minutes of its Central Board of Directors held in Chandigarh in October last year had certain portions blacked out.

Justifying the reasons for blacking out information the central bank said, “(It was done) after appropriately severing information that is permitted to be severed as per the Act.” 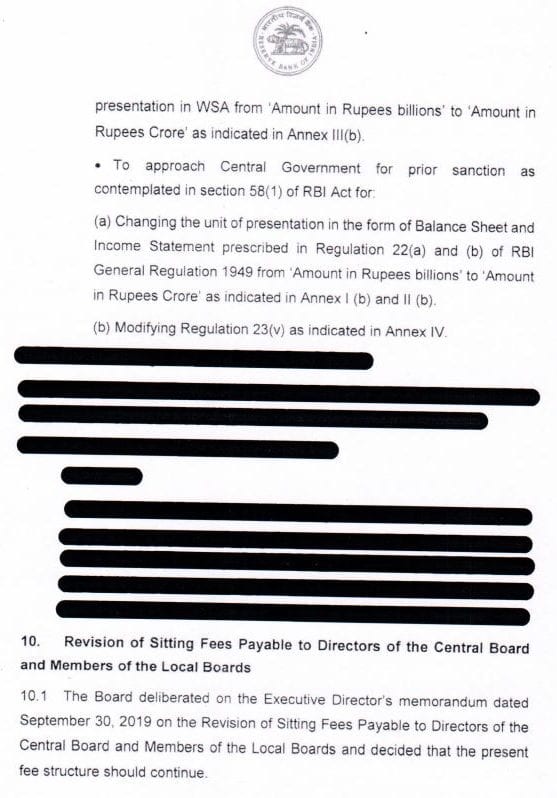 As per the minutes of the October meeting chaired by RBI Governor Shaktikanta Das, the Board discussed in detail the situation in the financial sector with special focus on regulatory and supervisory architecture of commercial and cooperative banks as also NBFCs. The 579th meeting the Board took up a host of issues, including sitting fees payable to directors of the board and members of the local RBI boards.

“The minutes of the meetings of the RBI’s Central Board of Directors (Central Board) have evinced considerable public interest and some of these have been shared with persons who sought them under the Right to Information Act 2005 (RTI Act),” the RBI release read.

As a measure of further enhancing public awareness, the RBI said it has decided to place the minutes of the meetings of the Central Board on the RBI’s website as per the RTI Act. RBI also said, the minutes will be placed on the website within two weeks from the date of its confirmation in the next meeting of the Central Board and on being signed by the chairman in the same meeting.

Withdrawing cash from ATM? It will soon cost you more