Incessant downpour battered several states, including Kerala, Maharashtra and Karnataka, on Friday (August 9), with landslips and floods throwing normal life out of gear.

Heavy to very heavy rainfall is likely at Kerala, Maharashtra, Goa, Madhya Pradesh, Karnataka and Rajasthan in the next 24 hours, according to a forecast by the India Meteorological Department.

Kerala Chief Minister Pinarayi Vijayan said 28 people have died over the past three days in rain-related incidents in the state, which is again at the receiving end of the natures fury. At least 40 people are feared trapped under debris in major landslides that took place in Wayanad and Malappuram, he said.

Rail, road and air transport took a hit in the state with several trains being cancelled and the Cochin International Airport shut till August 11 due to waterlogging in almost 60 per cent region of its operational area.

A red alert for rainfall has been issued in nine of the 14 districts in the state and all educational institutions will remain closed. Over 64,000 people have been shifted to 738 relief camps across the state, officials said.

Over 2.85 lakh people have been evacuated due to the devastating floods in western Maharashtra’s five districts, including the worst-hit Kolhapur and Sangli, with the death toll reaching 29 on Friday.

The region is being pummeled by rain over the last few days, and major rivers, including the Krishna and Panchaganga, are in spate.

A total of 34 rescue teams are working in Kolhapur and 36 in Sangli. These include teams of the NDRF, Navy, Coast Guard and State Disaster Response Force (SDRF).

In Karnataka, Chief Minister B S Yediyurappa said 12 people have died in rain-related incidents. The floods and rains have left a trail of destruction in vast areas of north, coastal and Malnad districts of the state. 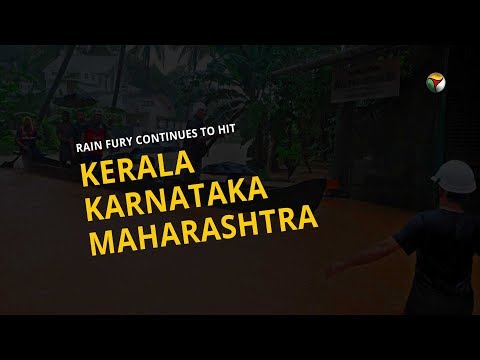 JDS supremo H D Deve Gowda on Friday pressed Modi to declare the floods in Karnataka as a national disaster of severe nature. Gowda said the flood situation in the state has worsened.

In Andhra Pradesh, 31 members belonging to the fishing community, including 12 women, who were trapped in the raging Godavari river at Polavaram were rescued by the Navy.

Heavy and incessant rains in south and west Odisha earlier this week claimed at least three lives, left two missing and hit over 1.3 lakh people in nine districts, officials said. The damage caused by the rainfall was known after the flood water receded from the submerged areas on Friday and the situation returned to normal, they said.

MeT Department officials said the recent spell of downpour was triggered by a deep depression which has now weakened and moved out of Odisha. However, a fresh bout of rainfall is likely to lash the state after three days due to a cyclonic circulation in the area, they said.

In Tamil Nadu, the death toll in rain-related incidents in the hilly Nilgiris district rose to five on Friday, even as the tourist destination of Avalanche recorded the highest rainfall of 911 mm on a single day in south India.

NCP chief Sharad Pawar said on Friday that an appeal for helping flood-affected people in Kolhapur, Sangli and Satara districts of Western Maharashtra raised Rs 1 crore in Baramati, his hometown, within few hours.