Taking repeated digs at opposition leaders including Rahul Gandhi in the Lok Sabha on Thursday (February 6), Prime Minister Narendra Modi called him a ‘tubelight’ suggesting that he takes longer to understand simple things and has low cognitive abilities.

The prime minister while replying to a debate on the President’s speech, made fun of Gandhi’s earlier statement at a rally where he had said “Narendra Modi who is giving speeches now will not be able to get out of his home in six-seven months. The youth of India will beat him with sticks”.

Recalling the same Modi said he will prepare himself for the beating by doing suryanamaskars (sun salutations).

“In 70 years, no Congress leader has ever become self-sufficient. I heard one leader’s manifesto yesterday. He said we will beat Modi with a stick in six months. I can imagine that it is a difficult prospect, so it will take six months to prepare,” he said. 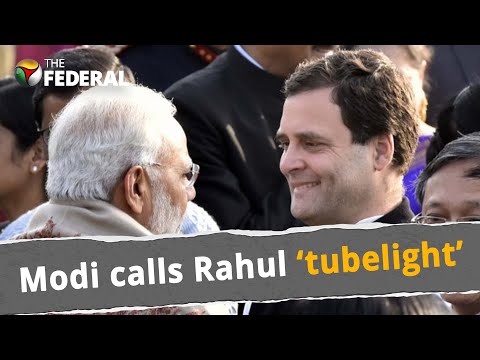 “In these six months, I will do more surya namaskar so that my back is ready for the beating…I have been subjected to abuses in the past 20 years, I will make myself gaali-proof (abuse-proof) and also danda-proof (stick-proof),” Modi said.

It was the point when Gandhi rose of from his seat to raise his protest to which Modi said it took the Congress leader a good 30 to 40 minutes to react to the joke.

“I have been speaking for 30-40 minutes but it took this long for the current to reach. Many tubelights are like this,” Modi said prompting ruling NDA members to burst into
laugh.

Modi, who was in a witty mood, also took several digs at Congress leader Adhir Ranjan Chowdhury for frequently rising from his seat and interrupting him, saying that he is publicising ‘Fit India’ campaign of his government in Parliament.

Responding to Chowdhury on the issue unemployment, Modi said he will resolve unemployment in the country but not his and of his party’s.

As soon as Prime Minister Modi entered the Lok Sabha premises he was welcomed by the BJP members by raising slogans of Jai Shri Ram to which Congress responded by Mahatma
Gandhi Zindabad and Mahatma Gandhi Amar Rahe.

Responding to Congress leader Shashi Tharoor’s criticism of the government, Modi suggested that Tharoor should have some soft corner for Kashmir, after all, he was “son-in-law” of the region, referring to his late wife Sunanda Pushkar, who was a Kashmiri pandit.

Later, while coming out from the parliament, Rahul Gandhi told reporters that the biggest problem the country is facing is unemployment and Modi-ji has nothing to say about that. PM’s style is to distract India.