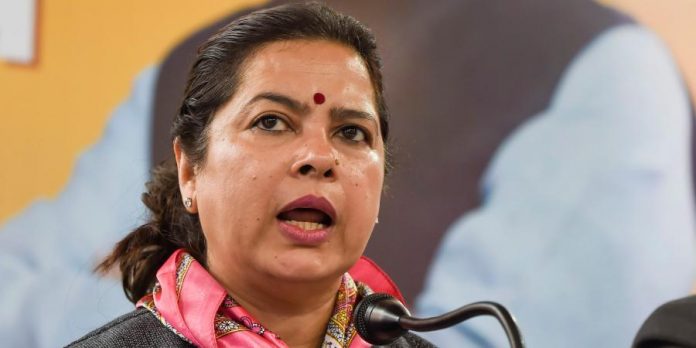 Minister of State for External Affairs Meenakshi Lekhi claimed that Amnesty had 'denied that the list floating around is not the actual list'. PTI Photo

Assertions by the BJP in the Pegasus snooping scandal and their almost simultaneous rejection came thick and fast on Thursday (July 22). The party railed against the global Pegasus Project media investigation as “fake news” and “yellow journalism”, claiming that Amnesty International had said that the list of phone numbers suspected to be under surveillance was not directly related to the Israeli company NSO Group.

The human rights organization issued a statement dismissing the “false rumours” and “inaccurate media stories”, stressing that it “categorically stands by” the findings of the investigation, The Indian Express reported.

At a press conference at the party headquarters on Thursday afternoon (July 23), Minister of State for External Affairs Meenakshi Lekhi claimed that Amnesty had “denied that the list floating around is not the actual list”.

Around the same time, Amnesty said: “Amnesty International categorically stands by the findings of the Pegasus Project, and that the data is irrefutably linked to potential targets of NSO Group’s Pegasus spyware. The false rumours being pushed on social media are intended to distract from the widespread unlawful targeting of journalists, activists and others that the Pegasus Project has revealed.”

The list of the so-called targets of surveillance by government clients of NSO Group’s Pegasus spyware was obtained by Amnesty International along with the French journalism nonprofit Forbidden Stories. The list was shared with 17 media partners around the world, including The Guardian in the United Kingdom, The Washington Post in the United States, Le Monde in France, and The Wire in India.

These media organizations have been publishing reports based on the leaked list as part of their ‘Pegasus Project’ probe.

Lekhi alleged that the “chronology” of the events around the publication of the reports indicated that it was part of efforts to defame India and to derail the legislative process in Parliament.

“Repeatedly this kind of narrative is built only to damage the reputation of India so that the new ecosystem which the government is trying to create to secure the data of Indians and to secure and build an ecosystem which is protective of Indian data and rights of Indian people,” Lekhi said.

“To damage all that, these kinds of things are created… In addition to that Parliament is in session, several new laws are to be brought in. Any decent debate on the Corona crisis will show the previous governments in poor light and the opposition-ruled states in poor light. To avert the arguments in favour of the government, this story is being depended upon,” she alleged.

“This is not a story,” Lekhi said. “This is a non-starter across the globe because based on concocted, fabricated, evidence-less story, nobody does a story. Because that story itself calls for forgery and defamation. Leaked data is an offence and that leads to further complications for people who base their stories on leaked data. It only happens in India,” she said.

Lekhi’s statements were based on reports that appeared on some websites, claiming that Amnesty International has said that it had never presented the list of phone numbers as an ‘NSO Pegasus Spyware list’.

Late on Wednesday (July 21), Kim Zetter, a US investigative journalist, tweeted a purported translation from an article published in Hebrew: “Amnesty International has never presented this list as an NSO Pegasus Spyware List, although some of the world’s media may have done so..list indicative of the interests of the company’s clients,” the Express reported.

Zetter tweeted Thursday: “Amnesty is now saying the Hebrew story in which their statement appeared misreported what they said. This means the English translation of that statement which I included in my tweet at the top of this thread was also incorrect.

“I should note that I had asked the Amnesty spokeswoman to provide me with an English version of the Hebrew statement that had been given in Israeli media. She never sent me the statement. Had she sent me the statement, we would have seen that the Israeli article had misquoted it,” Zetter said.

In its rebuttal, Amnesty said it was responding to “false allegations on social media and inaccurate media stories in relation to the Pegasus Project”.

The Wire, quoted by the Express, said it had spoken to Gil Naveh, spokesperson for Amnesty International Israel, “who confirmed that the organization’s Hebrew statement had been wrongly reported by a section of the media in Israel and is being wrongly quoted in English”.

On reports that Amnesty had said that the list of numbers was only “indicative” of NSO customers, The Wire wrote that Naveh had told the news portal that “this is a mistranslation, and that what he had said in his statement is that this is a list of numbers that the company’s customers’ have expressed interest in, which includes journalists and human rights activists, political rivals, lawyers and so on”.

Lekhi, who headed the Joint Parliamentary Committee on the Personal Data Protection Bill, claimed that the Pegasus reports are linked to the report of the committee, which has already been submitted to the Speaker.