A male tiger in Panna Tiger Reserve of Madhya Pradesh is showing an unusual trait: caring for and protecting cubs.

Uttam Kumar Sharma, Regional Director, Panna Tiger Reserve, has shared a video, which shows the male bringing food for the orphaned young ones. 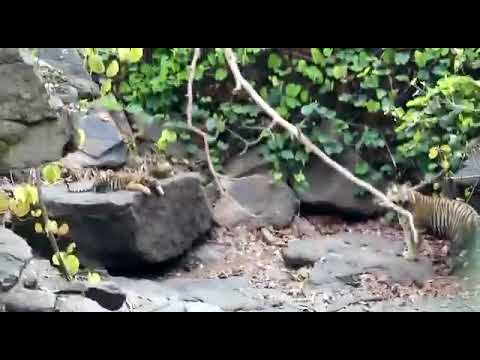 The four cubs resurfaced on Sunday (May 23) after they went missing on May 15, the day their mother (P-213) died. The forest department had been desperately looking for them since. A forest official said the cubs are 6-8 months old.

The Panna Tiger Reserve is collecting GPS satellite data and tracking the movement of the male tiger using a GPS collar device.

Also read: Return of the wild: After 69 years, India will have cheetah in its territory

Though rare, it is not the first time a male tiger has been seen taking care of the cubs. A decade back, a male (T25) feline was spotted caring for two young ones, which were his own, in the Ramthambore Tiger Reserve in Rajasthan. The cubs had lost their mother a few days before.

Generally, it is the female that looks after the cubs. The father, though won’t harm his own, hardly ever looks after them. For the tiger, cubs are nothing but food.