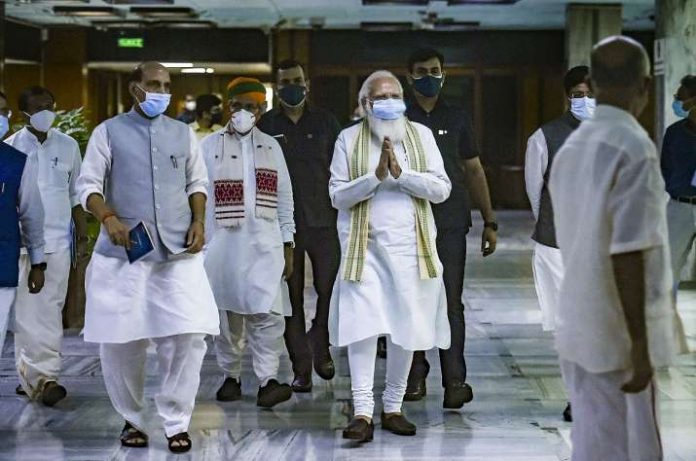 An Opposition leader said there was 'utter confusion' about the meeting called by the government on COVID situation. PTI Photo

The Opposition appeared divided on Tuesday (July 20) after Prime Minister Modi briefed the floor leaders of various parties in a three-hour meeting at Parliament House Annexe on the government’s management of the COVID pandemic.

The PM said India was in a better position than many countries in terms of the ratio of the population hit by the pandemic. He warned against any complacency in tackling the pandemic and referred to the resurgence of the infection in countries like the UK.

The Congress, CPI(M), CPI, AAP and RJD stayed away. The NDA’s former ally SAD too joined them. However, leaders of the Trinamool Congress, NCP, SP, Shiv Sena and DMK attended the meeting.

“There was utter confusion. There was no decision either to attend or stay away. There was no discussion. So some of us attended and some of the parties stayed away,” a senior Opposition leader said.

Leader of the Opposition in Rajya Sabha Mallikarjun Kharge said the Congress wanted the government to brief all MPs in the Central Hall of Parliament, and not just floor leaders.

“Had the entire Opposition stayed away, it wouldn’t have looked nice. The BJP would have said we are playing politics over the pandemic,” said another opposition leader.

“We had told the government that a discussion in the House should be held first. The government agreed to our demand and we had a five-hour discussion in Rajya Sabha on the COVID situation… So there was no point in staying away,” a leader said.

The Indian Express quoted sources as saying that there were differences within the Congress too on the decision to stay away from the presentation made by Union Health Secretary Rajesh Bhushan.

“The slides referred to absolute numbers, how many vaccinations have been done, and the absolute numbers are so much higher than other countries. Even in the comparison of states, they talked in absolute numbers, and obviously, the big states have more absolute numbers. What was missing was the percentage of the population vaccinated, and how states are performing, and how we will meet those targets,” a leader said.

The Prime Minister, sources said, informed leaders that vaccines from more companies are likely to be available in some time. The presentation was followed by queries and suggestions.

The Shiv Sena and TMC demanded more vaccines for Maharashtra and West Bengal, respectively. Leaders of the BJD and TMC also demanded the government expedite the process of getting global recognition for the indigenous Covaxin.