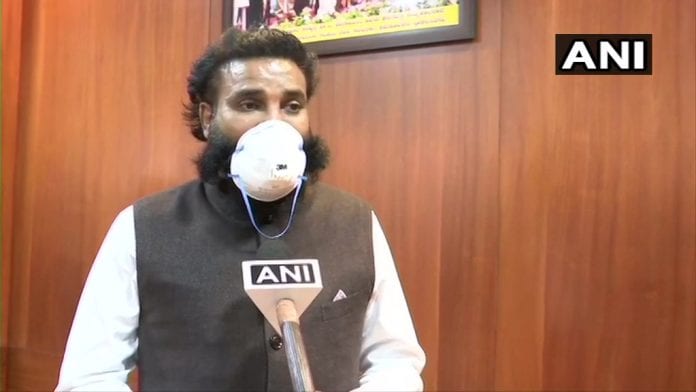 With Karnataka witnessing a sharp spike in COVID-19 cases, its Health Minister B. Sriramulu has said “only God can save the state,” insisting that public cooperation was key to controlling the spread of the pandemic.

The Ministers statement in Chitradurga on Wednesday (July 15) came in response to the opposition Congress charge of the government failing to tackle coronavirus spread, but he later claimed his remarks were misinterpreted by a section of the media.

“Tell me whose hand it is in(to control the disease). Only God has to save us all. Awareness among people is the only way. In such a situation, the Congress leaders have stooped to the lowest level of politics. It doesn’t suit anybody,” Sriramulu told reporters on Wednesday.

He was replying to opposition charges, especially by Congress state chief D.K. Shivakumar and former chief minister Siddaramaiah, who accused the government of failing to control
the coronavirus spread. They accused the lack of coordination and differences between ministers, mainly between Sriramulu and Medical Education Minister Dr K. Sudhakar as the reason.

The Health Minister denied these allegations. However, Sriramulu later sought to clarify that the intention behind his statement was that till the time a vaccine was developed to tackle the contagion, only God has to save all, while people’s cooperation was important too.

“I had said that besides peoples cooperation, God should also protect us but some media interpreted that Sriramulu has become helpless with respect to coronavirus spread,” he said in a late night video message on Wednesday.

Karnataka has been witnessing a spurt in COVID-19 cases and on Wednesday reported the highest single day spike of 3,176 infections. The states overall tally stood at 47,253 till
Wednesday with 928 fatalities. The total cases include 18,466 discharges and 27,853 active cases, according to the Health department.