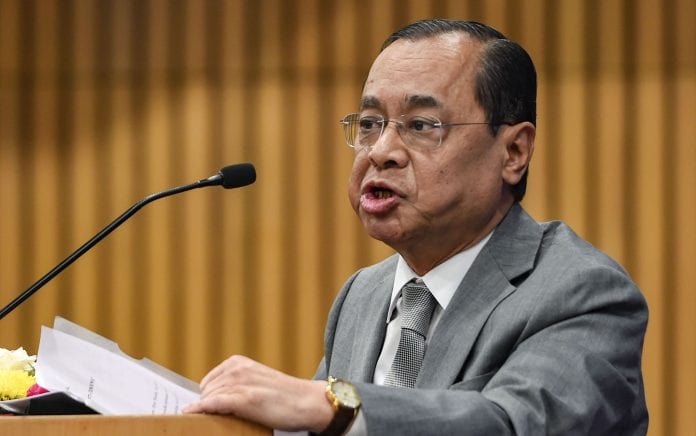 Chief Justice of India (CJI) Ranjan Gogoi on Sunday (November 3) said the National Register of Citizens (NRC) was not a new idea and that the current exercise was an attempt to update the 1951 NRC. He also said it was a base document for future that one can refer to determine future claims.

The Chief Justice, who was addressing a gathering during the inauguration of a book here, further said criticised the “arm chair commentators” who, he said, were far away from ground reality. He said the emergence of social media and its tools have also fuelled the intent of such arm chair commentators, “who thrive through their double speak language”.

“At the cross road we need to keep in mind that our national discourse has witnessed the emergence of armchair commentators who are not only far removed from ground realities but also seek to present a highly distorted picture,” Gogoi said. “They launch baseless and motivated tirades against democratic functioning and democratic institutions. Assam and its development agenda has been victim of such arm chair commentators.”

He also lamented that “careless” and “irresponsible reporting by a few media outlet only worsened the situation.”

Gogoi, who hails from Assam and is heading a Supreme Court bench that is monitoring the NRC process in the state, said that NRC is not  “new or a novel idea” as it found expression as early as in 1951 and that the current exercise is an attempt to update the 1951 NRC.

“The NRC is not without contestations. It is not a new nor a novel idea. It founds expression as early as in the year 1951 and in particular context of Assam in year 1985 when the Assam accord was signed. In fact, the current NRC is an attempt to update the 1951 NRC.”

“There was an urgent need to ascertain some degree of ascertaining on the number of illegal immigrants which the current exercise envisages. Nothing more and nothing less. The entire exercise is nothing but manifestation of one of the most peaceful means by which stake holders seeks to remedy the wrong and omissions of that turbulence whose effects changed the course of the life of not only individuals but of communities and culture across the region,” news agency PTI quoted him as saying.

The CJI also praised the citizens of Assam for displaying great magnanimity and large heartedness in accepting various cut off dates for the purpose of preparation of NRC.

Regarding the NRC exercise, he said, “It is an occasion to put things in proper perspective. The NRC is not a document for the moment. 19 lakhs or 40 lakhs does not matter. It is a base document for the future. It is a document to which one can refer to determine future claims. This in my comprehension is intrinsic value of the NRC.”

The CJI said that working of institutions are assessed especially by the media and particularly by social media.

Why coronavirus may bring succour to Assam’s ‘stepchildrenR...