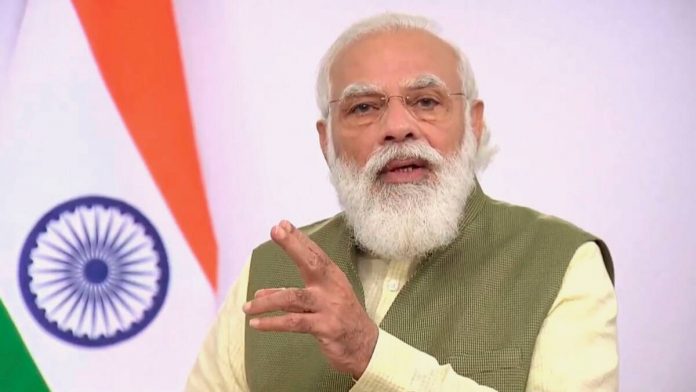 CVoter said that only 37% of respondents said they were “very satisfied” with Narendra Modi’s performance.

For the first time since he was re-elected as Prime Minister in 2019, Narendra Modi’s approval ratings seem to be dropping, two surveys – one Indian and another American – have shown as the country battles the worst health-crisis ever.

India’s total COVID tally has crossed 2.5 crore while the country reported 4,529 deaths in the last 24 hours — the world’s highest one day death toll so far, breaking the US’ one day record of 4,475. Modi, who has enjoyed widespread publicity as a nationalist leader, has faced people’s wrath for his government’s inability to foresee the second wave, which has swept the nation since March this year, resulting in a crumbling health infrastructure as people struggle to find basic medicines and even oxygen.

U.S. data intelligence company Morning Consult, which has been tracking Modi’s popularity since 2019, said that currently his overall ratings stand at 63%, the lowest since the American company started tracking his popularity.

CVOTER, an India-based international polling agency, found Modi’s rating fall to 37% from 65% a year ago.

Modi first became the Prime Minister in 2014, riding on a development agenda and high corruption in the erstwhile Manmohan Singh government. Despite all-round criticism of his demonetization move in 2016, Modi got re-elected in 2019, this time with a bigger majority. The BJP won 303 seats out of 542, reducing Congress, the main Opposition, to just 52 seats.

The dip in Narendra Modi’s popularity can largely be credited to his government’s inability to handle the second wave of COVID-19 efficiently. A health crisis, triggered by shortage of medicines, hospital beds and vital oxygen, has put a question mark on the government’s pandemic preparedness.

COVID-19 has been raging through most cities across the country, so much so that the courts had to intervene, posing very uncomfortable questions to the government. Even as the daily positive count sees a fall in the last four days, several state governments, including those ruled by BJP, like Madhya Pradesh, have warned of a fresh surge in cases in the rural belts.

Also read: India needs a Mahatma now to call out Modi’s ‘kingly’ fancies amid a pandemic

Senior Congress leader Rahul Gandhi recently tweeted: “The country would not have been in such a painful situation today, if access to vaccines (against coronavirus) was as easy as arresting people under the Modi ‘system’ for raising questions. Stop Corona, not questions raised by the public.”

While Modi’s popularity has gone down significantly, he still remains the country’s most popular politician. Besides, the next general elections are still a good three years away.

CVOTER data shows that a divided and directionless opposition has failed to capitalize on Modi government’s failed response to the COVID-19 situation.