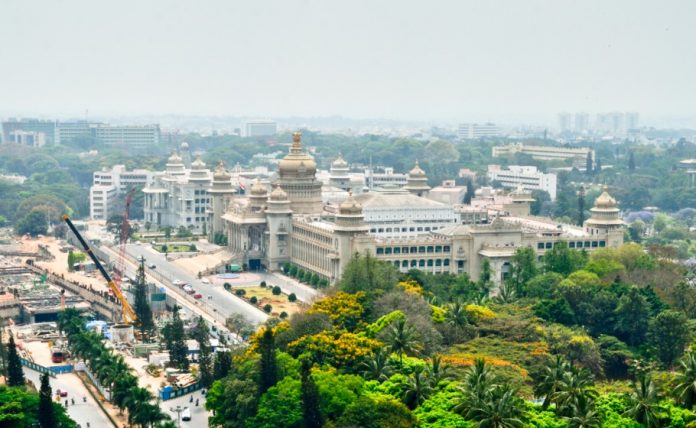 An aerial view of the Bengaluru city | File Photo

Capital cities in India’s states are usually believed to be the most developed – people prefer living there. But a new report from the Centre for Science and Environment (CSE) has analyzed data to find that only three state capitals in the country feature in the top 10 list of most livable cities in India (as per the Ease of Living Index, 2020).

Bengaluru was ranked as the best city overall, followed by Chennai. “Only one state capital (Bengaluru) demonstrates a decent economic ability, scoring 78.82 out of 100. Four other state capitals (Chennai, Mumbai, Delhi and Hyderabad) provide middling economic opportunities. The rest have all scored less than 30 out of 100.”

Delhi ranks sixth on the list, behind Bengaluru, Chennai, Shimla, Bhubaneswar and Mumbai. Delhi, in fact, ranked as the worst capital in the perception of citizens surveyed.

The findings are part of CSE’s latest report, State of India’s Environment 2021. It also ranked Delhi as the fourth best city in terms of governance behind Bhopal, Raipur and Mumbai. The ‘Ease of Living Index’ includes four factors: Quality of life, Economic ability, Sustainability  and Citizen perception survey.

In the ‘Quality of life’ category, which is given a weightage of 35 per cent, Panaji is ranked first and Srinagar the worst capital city. This category covers education, health, housing, solid waste management, safety and security, mobility and recreation.

In the ‘Economic Ability’ category, with a weightage of 15 per cent, Bengaluru has emerged as the best capital city while Kohima is the worst. This category covers level of economic development and economic opportunities.

On the ‘Sustainability’ front (weightage 20 per cent), Shimla is the best capital and Imphal is the worst. This includes elements such as environment, green spaces and buildings, energy consumption and city resilience.

In the ‘Citizen perception survey’ (weightage 30 per cent), the best capital is Bhubaneswar and the worst is Delhi. This survey is used to assess the role of administrators.

As Indian cities have expanded rapidly, essential municipal services and economic and other opportunities have failed to keep up, finds the CSE analysis.

Symptomatic of this malaise, the report says, is the abysmal percentage of sewage treatment in Indian cities – a mere 28 per cent sewage is being treated overall. The states and Union territories (UTs) of Andaman and Nicobar Islands, Arunachal Pradesh, Assam, Bihar, Chhattisgarh, Lakshadweep, Manipur, Meghalaya, Mizoram and Nagaland do not treat sewage in their cities at all.

CSE director Sunita Narain, while releasing the e-book, said: “There is drama in numbers, especially when these numbers give you a trend — are things getting better or worse? It is even more powerful when you can use the trend to understand the crisis, the challenge and the opportunity. The numbers in the case of Indian cities clearly suggest that the direction of development in them is unsustainable.”

Narain said accurate data availability can be of great help especially in the time of COVID pandemic. “Just consider how we have suffered in this past year because we do not have sufficient or accurate data on tests, or the number of deaths, or serological surveys, or genomic sequencing of the variants. In each case, data would have been (and is) critical for policy-making,” she said.