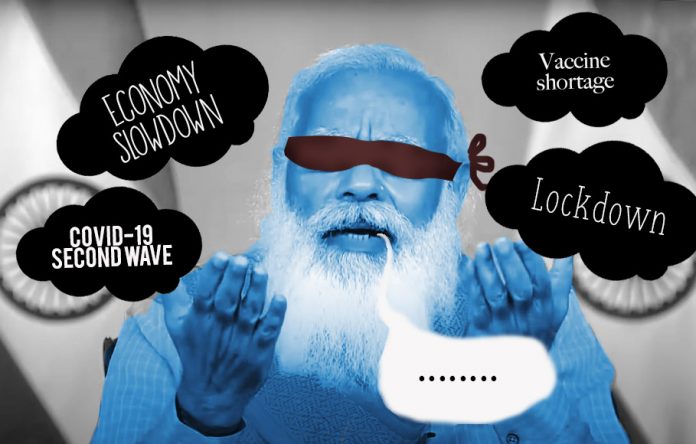 A lot has happened in the past few days.

COVID patients have been asphyxiated in their ICU beds for the want of oxygen, bodies of suspected patients have been found floating in the Ganges in Uttar Pradesh, a black fungus epidemic has swept through at least four Indian states and a Union territory while scientists anticipate a third wave of COVID to strike in the next six or eight months. This besides the fact that the government has not yet spelled out an action plan to clip the tentacles of the spreading pandemic, support economically marginalised people and instead chooses to gloat over its vaccination drive which has barely managed to reach 5 per cent of India’s adult population.

As expected, none of the above – with the exception of a passing reference to the black fungus epidemic – found mention in Prime Minister Narendra Modi’s interaction with doctors and health workers of Kashi on Friday, as he circumvented the hot potatoes with his usual grandiloquence, pats on the back, empty assurances and sobs, without specifically telling ‘what’s the plan’.

“This virus has snatched many people from us. Those who lost their loved ones because of Corona, I pay my tribute and I express my condolences,” said an emotional Modi during an online meeting to review the health situation in the district.

Describing Benares as an important medical hub, due to the efforts of the government over the past few years, Modi lauded doctors for ably handling the second wave of the pandemic.

“We are fighting several things in the second wave. Infection rate is high and patients are getting hospitalised for a longer time. This is creating pressure on our health system. The entire Purvanchal region is dependent on Kashi (another name for Benares). For the past few years, the work done in the health system has been good and it is being managed well,” he said.

The prime minister also mentioned that awareness for yoga and Ayush has increased among people and is giving them strength.

“By the grace of Mahadev, Benares is full of spiritual places. People here have shown an exceptional example of patience and service,” he said.

He, however, didn’t feel obliged to warn people against bathing in cow dung to apparently build immunity against COVID-19. He also didn’t explain why a group of men in Gujarat were seen indulging in the act, flouting COVID protocols, while two journalists were arrested under NSA in Manipur for social media posts against cow dung as a cure for COVID-19. This despite warnings by doctors that there is no scientific evidence to prove the effectiveness of cow dung in COVID treatment and that it risks spreading other diseases.

The prime minister said that vaccination just like the fight against coronavirus, should be a mass movement. Incidentally, according to a Down To Earth report, Uttar Pradesh has vaccinated only 2 per cent of its population while only a total of 5 per cent have been fully vaccinated and 16 per cent partially vaccinated in India.

Calling for special attention to taking medication to rural areas in a bid to take off the pressure from urban hospitals and setting up micro containment zones, Modi said there was an increased need to safeguard children from the clutches of the virus. He went on to laud the efforts of the Yogi Adityanath government in effectively dealing with the brain fever outbreak in the state in 2011 and 2012.

“We have had successes in the past in battling diseases which affect children, and we have successfully dealt with those illnesses and ensured the safety of our children. We must implement best practices and do all we can to ensure children are safe,” he said.

Even though Uttar Pradesh has recorded a fall in case positivity rate – from 19 per during the peak of COVID-19 to 2.4 per cent – there have been concerns over the disease spreading to rural areas and the sluggish pace of vaccination there.

While the government claims to have expanded the vaccination drive, having administered 1.54 crore doses so far, an India Today report said that vaccines are hard to come by for people in rural areas.

While hospital staff blame it on the reluctance of villagers, the latter have alleged of being turned away by health workers at primary health centres and told that there are no vaccines.

Another report says that lack of infrastructure and testing in rural areas have blocked the population from getting represented in the COVID management plan of states, even though in reality the cases are on the rise in these pockets.

Related news: India needs a Mahatma now to call out Modi’s ‘kingly’ fancies amid a pandemic

If summarised, the prime minister’s speech was a mix of grief, glorification and a bit about the government’s initiatives peppered with Sanskrit shlokas and references to religious and spiritual heritage of ‘Kashi’ (another name for Benares).

Given the fact that the country is all ears every time he speaks and all heart every time he sheds a tear, the prime minister could have spoken more on a national plan to tackle the disease, bottlenecks in the vaccination programme and identified and accepted failures by the Centre and states in COVID management to assure citizens that ‘everything will be alright’.