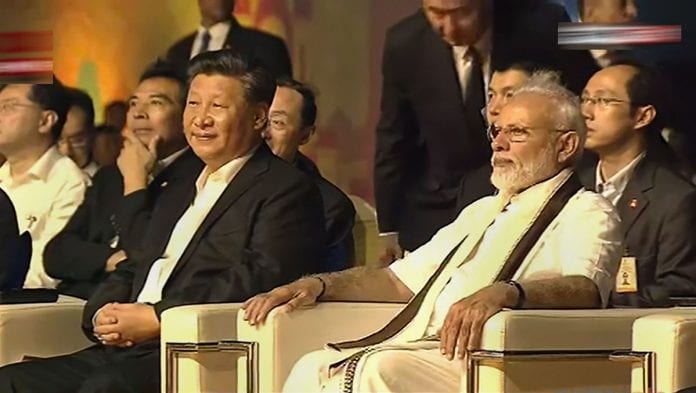 Prime Minister Narendra Modi in a veshti (dhoti), a traditional South Indian attire, and Chinese president Xi Jinping arrived at the port city of Mamallapuram, near Chennai, for their second informal summit. After a casual tete-a-tete, the two leaders sat along the seaside of the Shore Temple at the venue to witness the cultural programme organised by Kalakshetra.

The programme included a dance performance called ‘Alarippu’ that symbolises the offering of respect to God, the teacher and the audience and concluded with Shanthi Nilava Vendum – a prayer for global peace.

Thereafter, he took a helicopter to Kovalam from where he would travel to Mamallapuram, the venue of the meeting. Xi landed in Chennai around 2 pm. The tarmac of the airport witnessed a colourful assemblage of folk artists who welcomed the Chinese president with various dance forms.

Artistes performed thappattam, mayilattam, poi kaal kuthirai and bharathanatyam and played the thavil and nadaswaram to welcome the Chinese president.

Both the leaders will sit down in the 7th century Shore Temple complex, again on saturday with their respective delegations, overlooking the Bay of Bengal in this bustling ancient town, in an attempt to reconfigure ties strained by tough talk on the Kashmir issue by both sides.

For now, it suits Modi and Trump to stand against China