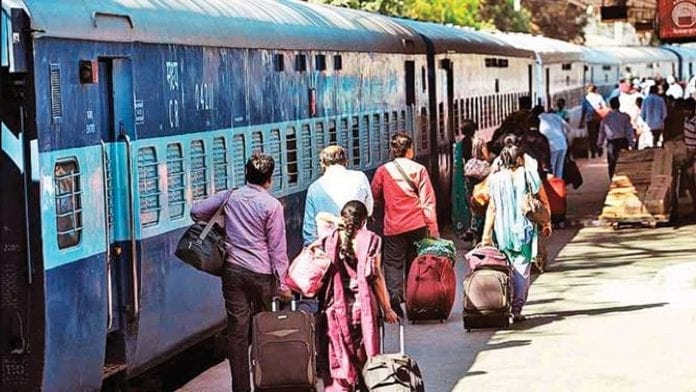 The Union Ministry of Home Affairs on Friday (May 1) gave the go-ahead for Indian Railways to ferry migrant workers, pilgrims, students, and other people stranded in different states through the operation of point-to-point ‘Shramik Special’ trains, kick-starting one of the biggest evacuation exercises in the country’s history.

Detailed guidelines are yet to be issued by the Railways regarding the sale of the ticket, and safety measures to be followed at railway stations, platforms, and inside the train. 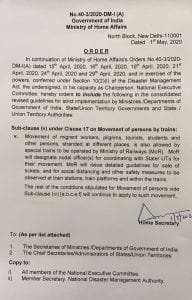 Social distancing should also be maintained, specified the order.

The order comes following the Centre’s decision to allow the Railways to run a special train to ferry 1,200 stranded migrants from Lingampally in Telangana to Hatia in Jharkhand on May 1 morning. The 24-coach train (No 02704) containing 54 people is expected to reach its destination at 11 pm the same night.

Even though Indian Railways has suspended passenger operations since March 22, sources in the ministry told The Federal, the entire operation was done quietly to avoid crowding at the railway stations.

The Centre on Wednesday (April 29) allowed inter-state movement of people stranded across the country, including migrant labourers, pilgrims, tourists, and students by buses.

Questioning the move and coveying the difficulties, state governments requested the Home Ministry to facilitate inter-state movement by trains.

“There are many practical difficulties in transporting such a large number of people stuck in far-off places. Since it’s not a matter of overnight journey, arrangements will have to be made on the way for food, toilets etc,” said a state government official. He added that maintaining social distancing on buses would be difficult.

In a letter to Prime Minister Narendra Modi, Punjab Chief Minister Amrinder Singh said, “Nearly one million workers will need transport to go back to their states. The only feasible option in the circumstances was to arrange special trains, which the Railways may run from point to point, keeping in view the number of persons to be transported to a given destination.”

Rajasthan chief minister Ashok Gehlot too had written a similar letter to Modi highlighting the need to run special trains for migrant labourers stranded across the country.

Special train between Kerala and Odisha

The first special train from Kerala carrying 1,200 migrant workers to Bhubaneswar in Odisha will leave from the Aluva railway station on Friday (May 1) evening, state minister VS Sunil Kumar, in-charge of COVID-19 operations in Ernakulam district said.

The district administration has arranged thirty buses to bring them to the station from Perumbavoor, the centre of the wood industry and a hub of migrant workers in Kerala.

The minister, who is currently camping at Perumbavoor, told The Federal that the transportation of guest workers would be done adhering to the social distancing rules and only thirty people were allowed in one bus.

He said the train has 25 boogies and would carry 1000 passengers. Workers have to pay the ticket charge of ₹500. Food and water would be provided by the district administration. The minister added that there would not be pantry in the train but cooked chapati, bananas, bread, and biscuits would be provided.

He also clarified that the information about the operation of the first train from Kerala was received around 11 pm on April 30.

In the press conference on April 30, Chief Minister Pinarayi Vijayan said the state had requested the Centre to start non-stop trains to transport migrant workers.

“There are around 6,000 workers in Ernakulam district from Odisha. This is in addition to the 1,000 people leaving today. Hence we need more trains as we have to strictly follow social distancing,” Sunil Kumar said.

He also requested that the migrant workers to understand the situation and show patience. He promised that everyone who wants to go back to their home states would be certainly given transportation. “There are more trains tomorrow,” said the minister, but did not confirm the details.

Karnataka may run special trains from May 2

The Karnataka government is set to take a call on the matter in the evening on May 01. “We have trains ready to be dispatched as and when required. Depending on the government’s decision, we will resume special trains either from Saturday (May 2) night or on Sunday (May 3),” said Ashok Kumar Verma, divisional railway manager (DRM), Bengaluru.

The divisional manager at Hubli, North Karnataka, too confirmed the same and said there were no talks on special trains as on date and that it would be decided by all stakeholders on May 1.

(With inputs from Shahina K K and Prabhu Mallikarjunan)