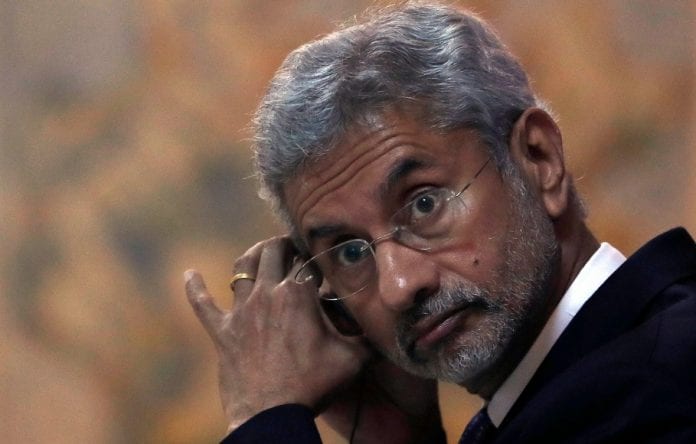 External Affairs Minister, S Jaishankar had arrived in the UK on Monday (May 3) on the invitation of UK foreign secretary Dominic Raab for the G7 Foreign Ministers and Development meet. PTI file

India’s External Affairs Minister S Jaishankar, who is currently on an official visit to the UK, has been forced to go virtual with the rest of his meetings and interactions with his counterparts from other nations, since two members from his delegation have tested positive for COVID-19.

Jaishankar, who tweeted on Tuesday (May 4) that after being made aware that he has been exposed to possible COVID positive cases, as a “measure of abundant caution”, he had decided to conduct his remaining engagements in the UK on “virtual mode”. This will also apply to the G7 Foreign and Development Ministers summit that he was slated to attend on the same day.

Jaishankar had arrived on Monday (May 3) on a four-day visit on the invitation of UK foreign secretary, Dominic Raab for the G7 meet. The other guest nations participating in this meet were Australia, the Republic of Korea and South Africa, as well as the chair of the Association of Southeast Asian Nations. Jaishankar was meant to join the ministers from these countries for a working dinner on Tuesday evening as well, said an Indian Express report.

A bilateral meeting with Raab at Chevening in Kent on Thursday (May 6) may now have to be conducted through a virtual format, while a diaspora focussed event hosted by Indian High Commissioner Gaitri Issar Kumar on Wednesday, went online.

The G7 meeting, the first in-person summit since the pandemic for the ministers from the seven countries –Canada, France, Germany, Italy, Japan, US and UK as well as the European Union (EU) –was being held under he canopy of strict COVID-19 protocols.

Delegates and staff had to conduct daily COVID-19 tests, with on-site testing facility at the venue. And, 35 litres of hand sanitiser in G7-branded bottles were to be provided in the premises. Social distancing was to be observed as delegates  would be seated behind Perspex screens in meetings and during working lunches/dinners.

Meanwhile, on his arrival in the UK on Monday, before he decided to resort to virtual meetings, Jaishankar had held talks with US Secretary of State Antony Blinken, on the global pandemic challenge, vaccine production capacity and supply chains.

Before he quarantined himself, the External Affairs Minister met UK Home Secretary Priti Patel and signed a new Migration and Mobility Partnership Agreement, which he had tweeted about. This agreement would enable legal travel and encourage talent flows, he had said in his tweet.

Subsequently, he held talks with Josep Borrell Fontelles, the High Representative of the European Union for Foreign Affairs and Security Policy. He had thanked the EU for the “support and goodwill” they had extended to India hit hard by the second wave of the COVID-19 pandemic. He also held “substantive discussions” with French Foreign Minister Jean-Yves Le Drian and Australian Foreign Minister Marise Payne in a first trilateral dialogue with these countries. Also, discussed the possibility of joining together to fight the pandemic with South African Foreign Minister Dr Naledi Pandor. And also talked about economic recogered and Commonwealth issues.

Chances of catching COVID indoors related to positive cases in the r...