“After all, my name is Stalin – do I have to say anything more to prove our relationship with the Communists,” said MK Stalin, the chief Minister of Tamil Nadu, while addressing a packed stadium in Kannur, Kerala.

Stalin was delivering a keynote address at the seminar organised as part of the 23rd CPM party congress on Saturday (April 9).

The Tamil Nadu CM said it was Pariyar (E V Ramaswamy Naikkar) who translated the Communist manifesto into Tamil — a statement that received thunderous applause from the crowd. The Tamil Nadu Chief Minister started his speech in Tamil and swiftly switched to Malayalam, to the awe of the comrades present.

“The BJP-led Union Government is hell-bent on turning everything into a monolithic structure which could destroy the very essence of our country,” said Stalin, adding, “We cannot sit and nod like dolls…we have to put up a fight. This is not to save Kerala or Tamil Nadu; our fight will be for each and every state of this country. The people of Kerala should do the same.”

To uphold the secular fabric of India, all like-minded people should come together, said Stalin.

In his inaugural speech, Kerala Chief Minister Pinarayi Vijayan came down heavily on Union Home Minister Amit Shah’s remark suggesting “Hindi as an alternative to English”. “This move would destroy the unity and integrity of the country. The Sangh Parivar never wanted this country to remain diverse and is against even the parliamentary democracy. The RSS was opposed to the idea of creation of states on the basis of language. They wanted to impose presidential system in India from the beginning. After the BJP came to power each and every one of their proposed reforms is aimed at destabilising the notion of diverse India,” said Vijayan. 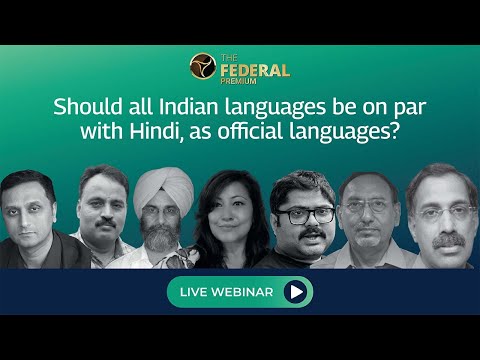 Earlier, the seminar stoked controversy as Congress leader and former Minister K V Thomas decided to attend the same defying the diktat of the party leadership. Shashi Tharoor and ManiShanker Iyer were also invited by the CPI (M), but both of them decided against coming after the Congress issued a diktat against doing so.

“The topic of the seminar was relationship between Center and state governments, but the media has shifted the focus to K V Thomas,” said Vijayan during his introduction speech. He clarified that Thomas is still participating in the seminar as the leader of the Congress party.

In his address, Thomas showered praise on Pinarayi Vijayan calling him the pride of the state. “Had the Congress leaders in Kerala listened to the parliament speeches of our leader Rahul Gandhi, they would have understood the need of joining hands with other parties on topics like this,” said the veteran leader. Thomas said he was thankful to the Chief Minister for giving him clarity, when he was struggling to decide on taking participate in the seminar. “Pinarayi Vijayan is one of the best chief ministers in the country,” added Thomas.

Earlier in his presidential address, Kodiyeri Balakrishnan also criticised the Congress for not allowing its leaders to attend the seminar. “I think K V Thomas’ future in the Congress party will be decided in a couple of days,” said Kodiyeri.