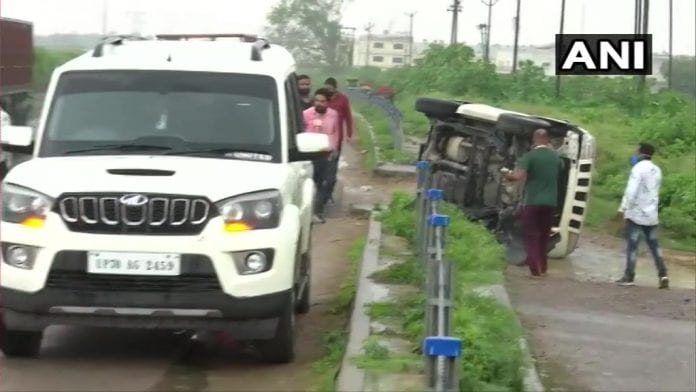 The visuals obtained from at least two places contradict the police story on the accident and subsequent encounter killing of gangster Vikas Dubey.
Dubey was killed in a reported encounter when he was being taken to Kanpur from Madhya Pradesh by the police. The police had said the vehicle carrying Vikas Dubey overturned. As per the police version, the gangster tried to snatch a gun from a policeman and tried to escape when the police resorted to ‘retaliatory fire.’

The visuals from of three cars crossing a toll booth around 4 am show Vikas Dubey in another car and not the one which looks to have met with the accident.

#WATCH One of the vehicles of the convoy of Uttar Pradesh Special Task Force that was bringing back #VikasDubey from Madhya Pradesh to Kanpur overturned today morning. Following the accident, Dubey was killed in police encounter when he tried to flee. pic.twitter.com/AaZnDvmHHk

Another video tweeted by news agency ANI, around 6:30 am, just half an hour before the encounter, police were seen stopping media vans tailing the convoy.

#WATCH Media persons, who were following the convoy bringing back gangster Vikas Dubey, were stopped by police in Sachendi area of Kanpur before the encounter around 6.30 am in which the criminal was killed. (Earlier visuals) pic.twitter.com/K1B56NGV5p

An eyewitness Ashwin Paswan, told ANI Hindi that he heard gunshots, but was asked to leave the place by the police. “The sound that we heard here was of gunshots. When we were coming to see, the police sent us away. We were on our way home,” he said.

Many people have raised concerns on the encounter and questioned the truth behind the police’s account. Soon after the incident was reported the hashtag #FakeEncounter was trending on Twitter.

Three of Vikas Dubey’s close aides Amar Dubey, Prabhat and Praveen too were encountered on Wednesday and Thursday. The police gave a similar account and said the accused snatched a police pistol and tried to flee when they fired in ‘self defence’.