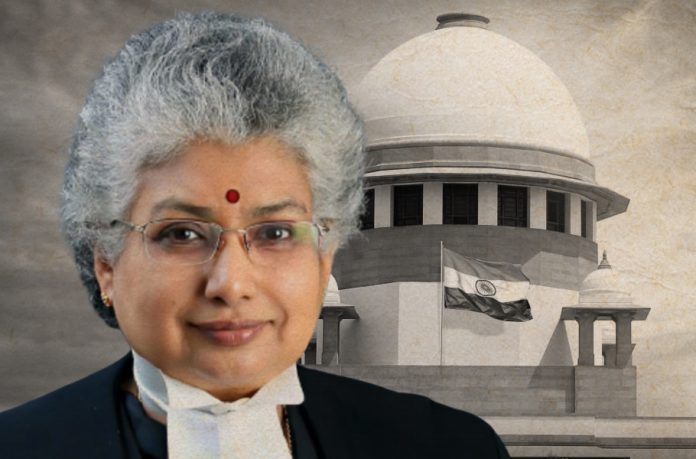 After a long wait, India is all set to get its first woman Chief Justice by 2027 as the Centre has already given its nod to the nine names recommended by the Supreme Court collegium to be promoted to the apex court.

Once President Ram Nath Kovind gives his approval, Justice BV Nagarathna and the eight other judges including two women – Justice Hima Kohli, the Chief Justice of the Telangana High Court and Justice Bela M Trivedi of the Gujarat High Court – will be sworn in on August 31.

Who is Justice Nagarathna?

Currently a judge at the Karnataka High Court, Justice Nagarathna is the daughter of Justice ES Venkataramaiah, the 19th CJI of India, and will be the second CJI from Karnataka.

Born on October 30, 1962, she registered with the Karnataka Bar Council in 1987 where she practised constitutional law, commercial law, and administrative law.

She was appointed as an additional judge to the Karnataka High Court in 2008 and became a permanent judge in February 2010.

Justice Nagarathna hit the headlines when she along with two other judges of the high court were locked in a courtroom by agitating lawyers.

“We are not angry, but we are sad that the Bar has done this to us. We have to hang our heads in shame,” Justice Nagarathna had said later.

An advocate of social welfare, right to education for children and rights of women and the marginalised, Justice Nagarathna has given key judgments pertaining to the companies act, civil litigation and criminal trials.

In one of her key judgments in 2021, she appealed to the Parliament to amend the law to protect the rights of children born out of illegitimate marriages.

“No child is born in this world without a father and a mother. A child has no role to play in his/her birth. Hence, law should recognize the fact that there may be illegitimate parents, but no illegitimate children,” she had said in her judgment.

Most recently, Justice Nagarathna, acting upon a survey report that said that around 24.50 per cent of students didn’t have access to e-classes amid the COVID-19 pandemic, had directed the state government to come forward with a plan to bridge the e-divide between children.

“…economic backwardness or poverty should not become a reason for lack of continuity in education,” she said.

In another order in the Anti-Corruption Council of India Vs The State of Karnataka on July 1 this year, Justice Nagarathna had expressed her concern over quality of education in rural pockets of the state.

“One of the reasons why children don’t like schools is because of the environment there, walls are broken, leakages are there, no water supply, no electricity, etc. especially in rural areas,” she had observed.

The bench led by her had instructed a group of experts to assist the government in forming a roadmap to spend the ₹100 crore budget for school infrastructure in a judicious way.

While hearing a case on the migrant crisis last year, Justice Nagarathna along with Chief Justice Oka directed the state government to furnish its plan to ensure the transportation of over 6 lakh migrant labourers. The bench had also instructed the government to make necessary arrangements to ensure food and water for migrants slated to travel home in special Shramik trains. It was after the judgment that the government volunteered to foot the travel expenses of the migrants.

In a 2019 judgment, Justice Nagarathna had rapped the media for resorting to sensationalism in the name of ‘Breaking News’.

“While truthful dissemination of information is an essential requirement of any broadcasting channel, sensationalism in the form of ‘Breaking News’, ‘Flash News’ or in any other form must be curbed,” she said.

Several judgments passed by her reflect her concerns for women and the girl child.

While hearing a divorce case in December 2020, she had called out parents for failing to “teach their sons how to treat an empowered woman”.

In one of her orders this year, she had directed for the implementation of the SUCHI scheme to ensure a smooth distribution of sanitary napkins to adolescent girls between the age of 10 and 19 years, studying in schools and staying in hostels.

“Providing separate toilets for girls and hygiene by way of providing sanitary napkins to adolescent girls, is an instance of empowerment. If you want to empower young woman and young girls, provide these facilities,” she wrote.