The HRD Ministry-constituted high-power committee will visit the Jawaharlal Nehru University (JNU) campus on Friday (November 22) to meet the students and find a solution to the current issues regarding hostel fee hike, officials said.

The meeting commenced around 10.30 am and the JNUSU office-bearers attended it along with the student councillors from different schools, they said.

Authorities of the JNU have appealed to students to call off their protest and return to classes in order to allow normal functioning of academic activities.

JNUSU president Aishe Ghosh, while addressing the press, said that they put forth the demand for a complete rollback of the hostel fee hike. She also said till the time the high-power committee submits its report, the fee hike must be put in abeyance, according to sources. She added that any further discussions regarding this issue with the committee of the HRD Ministry will be done only at the JNU campus.

JNUSU General Secy: The meeting was between all the 4 office bearers of the JNUSU & counsellors. We briefed them about the crisis in JNU. We were told that our demands will be further recommended as soon as possible. Protest will continue inside campus until our demands are met. https://t.co/TQaWJpAPcW pic.twitter.com/8ySe94Zx6q

Meanwhile, visually challenged students of JNU on Wednesday (November 20) protested outside the old police headquarters in New Delhi against the alleged baton charge by the police on varsity students protesting against hostel fee hike.

Rashmi Sharma, a differently-abled student, said, “We want a written apology from Delhi police on the lathi charge that they did on a visually challenged student.”

“A few days back, police were protesting after they were beaten up by lawyers. How could they forget that students also have a right to protest?” said Manish Chauhan, an MPhil student.

The JNU forum for visually impaired students had earlier called for a demonstration in front of Delhi Police headquarters against “the lathi charge of Delhi Police on the students of the University and demand for justice for persons with disabilities”.

However, police stopped their bus while they were on the way to Jai Singh Road and took them to Vasant Kunj police station. Later, the students said their bus was brought to the old police headquarters at ITO.

Yesterday, the administration of the JNU moved the Delhi High Court seeking contempt proceedings against its students for allegedly violating an earlier court order that barred any protests within 100 metres of the university’s administrative block; and hampering the day-to-day activities of the institution.

Reminding the high court of its 2017 order which stated that no protest can be undertaken by students within a 100-metre radius of the administrative block, the varsity in its petition sought direction from Delhi Police Commissioner Amulya Patnaik to provide assistance in controlling the stir and removing protesters from the 100 metre radius of the campus. 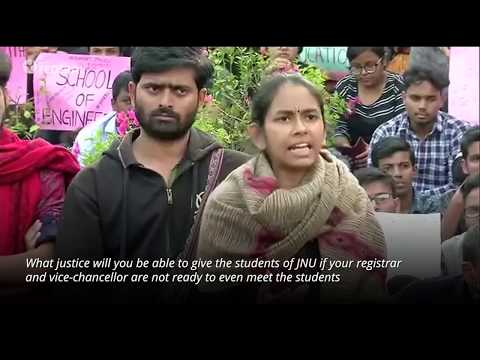 The petition filed through the Monika Arora, the Centre’s standing counsel also prayed the court to issue contempt notice against students and police and hand out punishments in accordance with the Contempt of Court Act for alleged willful disobedience of the court order.

Acknowledging the “right to students to protest and exercise their freedom of speech”, the petition, however, said “such rights have to be exercised responsible, reasonably and in a peaceful manner”, reported Indian Express.

Students of the university have been protesting for over three weeks against a draft hostel manual which has provisions for a hike in hostel fee, imposition of dress code and curfew timings on campus.

The protest took a violent turn on Monday (November 18), when thousands of students while on a protest march towards the Parliament had a face-off with the police. While more than 100 students were detained on the day, almost 30 police personnel and 15 students were injured during the protest.

On Tuesday, Delhi Police filed two FIRs in connection to the students’ protest.