A large number of students and women who had gathered in front of the Gateway of India, to protest against the violence that was unleashed at the Jawaharlal Nehru University (JNU),  were shifted to Azad Maidan on Tuesday (January 7) by the Mumbai police.

Some voluntarily moved out while others were dragged away from the “Occupy Gateway” protest site as they refused to comply with the directions of the city police.

Earlier, police appealed to the protesters to move out as the crowd was becoming unmanageable and causing trouble to commuters and tourists.

“Roads were getting blocked and common Mumbaikar and tourists were facing problems. We had appealed to protesters many times, have now relocated them to Azad Maidan,” said, Sangramsingh Nishandar, DCP (Zone 1).

Mumbai: Protesters(protesting against #JNUViolence) at Gateway of India evicted by Police and relocated to Azad Maidan. (earlier visuals) pic.twitter.com/tSTB9rXiXb

With tambourines and guitars in their hands and songs of revolution on their lips, people protested against the attack on JNU students throughout the night in front of the Gateway of India and the Taj Mahal Palace hotel here.

Protesters, waiving the tricolour, raised slogans like ‘Kagaz nahi dikhayenge’ and ‘Tum kaun ho be” besides demanding the resignation of Modi and Shah.

Slogans against Modi-Shah and their “tanashahi” (dictatorship) were raised by the protesters as they opposed the Citizenship (Amendment) Act, the National Register of Citizens and the National Population Register. They also brought up the issue of the Transgender Persons (Protection of Rights) Act, 2019, during their protest. 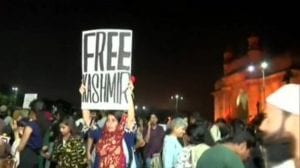 Also, posters demanding that Kashmir be freed were noticed at the protest site. Taking note of it, DCP Nishandar said, “We have taken serious cognisance of the ‘free Kashmir’ poster seen in the protest last night at Gateway of India. We are definitely investigating it.” Reports claimed that JNU alumni Umar Khalid and Kunal Kamra also participated in the protest that began with a candlelight march.

Earlier on Monday, protest were organised near the Hutatma Chowk in the city. A call too was given to people to join the protests in front of the Gateway of India, where demonstrations began on Sunday night.

Goons of the Akhil Bharatiya Vidyarthi Parishad (ABVP) attacked students by entering the women’s hostel at the Jawaharlal Nehru University (JNU), the protesters alleged and demanded that the students’ organisation be banned.