The Federal replugs this copy on the Jarkiholi brothers, originally published on November 22, 2019, after Karnataka Minister Ramesh Jarkiholi got caught in a sex scandal and resigned on Wednesday.

The clout of the five Jarkiholi brothers — Ramesh, Satish, Balachandra, Bimashi and Lakhan — in Belagavi is hard to ignore. Hailing from an influential family with varied business interests that has spread over the past two decades, three of the five — Ramesh, Satish and Balachandra — were elected to the Karnataka Legislative Assembly in 2018, further cementing the position of the Jarkiholis in Karnataka politics.

For the onlooker, it has been interesting how the brothers have wielded power and are popular among the public, despite representing different political parties, jumping parties and clashing with one another.

In the 2018 Karnataka Assembly polls, while Ramesh and Satish fought on a Congress ticket, Balachandra was fielded by the BJP. The upcoming Karnataka bypolls will see the entry of Lakhan, the youngest of the Jarkiholi brothers, into the political arena. Lakhan, fielded by the Congress has been pitted against his brother Ramesh from the Gokak constituency.

Even though the brothers are known for constantly changing their allegiance from one party to another, the shift hasn’t affected their hold over Belagavi in North Karnataka.

The brothers have switched parties to remain on the winning side and bag a spot in the cabinet. Ramesh moved from the Congress to the BJP in 2019, while Satish had changed his allegiance from the JD(S) to Congress in 2005. Balachandra had jumped to the BJP bandwagon from the JD(S) in 2013 and Bhamashi had quit the BJP and contested as an independent candidate in 2013. Although Lakhan hadn’t entered politics until now, he is said to have been torn between choosing Ramesh and Satish. He has finally joined the Congress ahead of the bypolls.

The family feud between the two brothers — Ramesh and Satish — for ministership in the Siddaramaiah cabinet was the starting point of trouble that led to the widening of their differences. 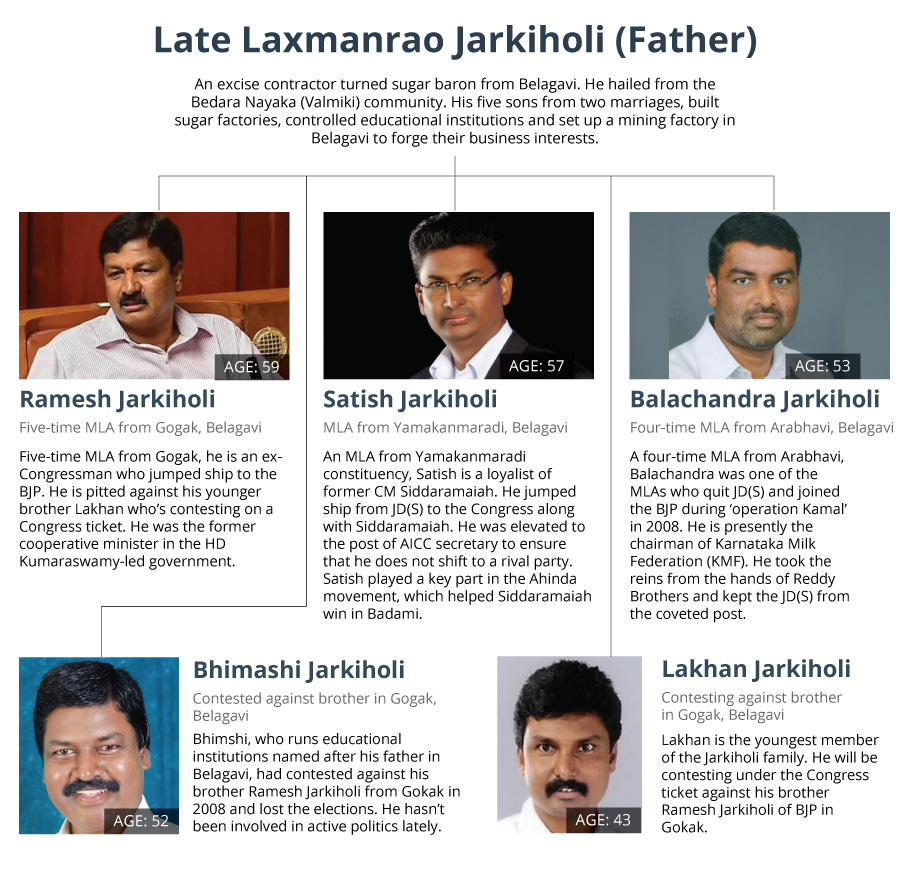 In 2016, Siddaramaiah under the pressure of senior Congress leaders, dropped Satish from the cabinet to accommodate Ramesh as the small-scale industries minister and in-charge of the Belagavi district. Later Ramesh shifted allegiance to BJP after he was dropped from the Kumaraswamy cabinet last December, to make way for disgruntled MLAs who had threated to defect.

Satish was the one who helped Lakhan get a Congress ticket with party leader Siddaramaiah’s backing. However, sources say, that the rift between the brothers is only an eyewash and they are on actually on good terms as they together control the family’s sugar industry, the key to their hold over the region.

Over the years, powerful families which had an interest in the sugar business – the likes of Kattis, Koujalgis and Jolles – controlled politics in Belagavi. The Jarkiholis were a new entrant in the early 2000s. The family rose to power when the region stated to expand as a sugarcane belt, overtaking the traditional sugar industry of Mandya in the Old Mysore region. It was a time when the family shunned its illicit liquor business to expand to other businesses.

It was also a time when the family nurtured ambitions to wield power in the north Karnataka. Belagavi has the second-highest number of seats for a district (18 seats) after Bengaluru (28 seats). It remains important for political leaders to establish their stronghold in the Lingayat heartland of North Karnataka.

The Congress backed the Jarkiholis to keep the Reddy brothers, hailing from another influential political family, at bay in North Karnataka. The Congress push for the Jarkiholis became stronger after the mining scam (Rs 35,000 crore illegal mining scam between 2006 and 2011) left the image of the Reddy brothers tainted. The Congress supported Jarkiholis who belong to Valmiki community to beat BJP’s Sriramulu, a close confidante of Reddy Brothers, who hailed from the same community and was emerging as the BJP’s face in the absence of Reddy Brothers.

For DK Shivakumar, Congress’ leader from the Vokkaliga community, who had already established his base in the southern region, Belagavi was the next stop which would have fulfilled his ambition to be the chief minister.

Shivakumar attempted to enter Belagavi’s politics through Laxmi Hebbalkar, a Congress MLA from Belagavi Rural, who was changing the power politics in the local body elections and control the cooperative banks that had links to Jarkiholis’ business empires. Hebbalkar, with the help of Shivakumar, succeeded in her attempts by replacing candidates of her choice on the board of the Primary Land Development Bank in Belagavi last year. Hebbalkar also had interest in sugar business which threatened that of the Jarkiholis.

In 2014, Hebbalkar and her family set up Harsha Sugars Ltd. in Belgaum with an initial capital of ₹69.9 crore. She and her son Mrinal Hebbalkar are directors in the company.

Enraged by this, Ramesh and Satish warned Siddaramaiah and other senior leaders, asking them to keep Shivakumar away from Belagavi politics. They even threatened to quit the Congress if Shivakumar was not taken to task. While Siddaramaiah tried to broker peace among all the three, he became a mute spectator after a point of time, particularly after the poor performance of the Congress in the 2018 Assembly elections.

Ramesh, who was still furious over his family losing control over the Sugar business in the area, threatened the party leadership to shift to the BJP and bring down the coalition (JDS and Congress) government. He made a firm decision to join the BJP after attempts by the coalition partners to balance the power-sharing between Ramesh and Satish; and Shivakumar in the region failed.

Ramesh was one of the first MLAs to rebel against the coalition government in 2018. The BJP cashed in on the opportunity and assured Ramesh of a cabinet berth if he moves to the BJP, while entrusting his brother Balachandra with controlling the cash-rich Karnataka Milk Federation.

According to BJP sources, Ramesh, who jumped ship from Congress to the BJP has now been promised the deputy chief minister’s post, if the BJP wins maximum seats in the by-elections on December 5. If the BJP is true to its word, Ramesh will ideally replace Laxman Savadi, one of the four deputy chief ministers who hails from Belagavi. Savadi is not a member of both the Houses and was hoping to get a bypoll ticket.