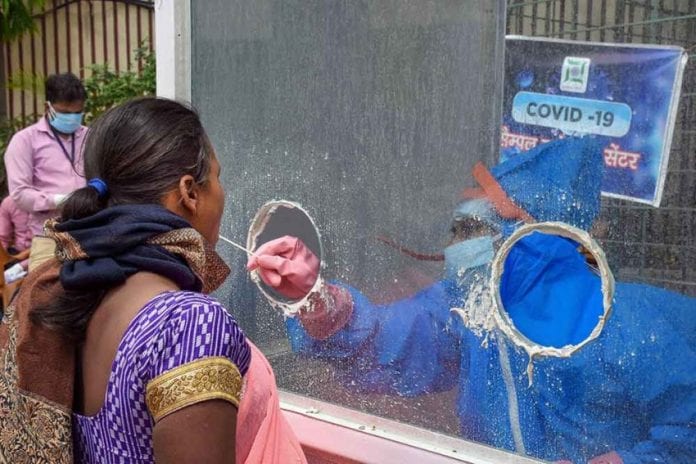 A record spike in COVID-19 cases in Maharashtra, Tamil Nadu, and Andhra Pradesh on Thursday (June 25) triggered the biggest single-day jump of close to 17,000 infections in the country even as Maharashtra decided to undertake antigen and rapid antibody tests for the disease in the worst-hit state.

According to the Union Health ministry data, COVID-19 cases rose by the highest-ever number of 16,922 to reach 4,73,105, while the death toll climbed to 14,894 with 418 new fatalities. This was the sixth consecutive day when coronavirus cases increased by more than 14,000.

However, the recovery rate has improved to 57.43 per cent, according to the Health ministry.

A central team led by Joint Secretary in the Health Ministry Lav Agarwal will visit Gujarat, Maharashtra and Telangana between June 26 and 29 to coordinate with the state officials in strengthening COVID-19 management efforts in those areas.

According to officials, the team will also review the measures undertaken by the states for containment of COVID-19.

Maharashtra recorded the highest daily jump of 4,841 new cases and the tally rose to 1,47,741, a state health official said.

Gujarat was in the fourth position with a tally of 28,943 while Telangana reported 10,331 cases, according to health ministry data. Twelve states have reported over 10,000 cases.
Tamil Nadu recorded 3,509 new virus cases, the highest single day increase so far, to take the infection count to 70,977, a health department bulletin said. Andhra Pradesh also scaled a new high of 553 cases to reach a count of 10,884.

The Maharashtra government said it would conduct antigen tests, which would provide results of the COVID-19 tests within an hour, unlike the current waiting period of over 24 hours.

“Procurement orders have been given. Priority would be given to conducting this test on the frontline COVID-19 workers, such as essential services staff, health workers, police, and others,” he told reporters in Mumbai.

The state government has also decided to undertake rapid antibody test kits for which were being supplied by a South Korean company.

“It will help the state in finding out whether a person has contracted COVID-19 infection,” Tope said.

According to the Indian Council of Medical Research (ICMR), a total of 75,60,782 samples have been tested across the country up to June 24 with 2,07,871 samples being tested on Wednesday.

In some good developments for Mumbai, the growth rate of coronavirus cases in the city is decreasing with every passing day, the data released by the Brihanmumbai Municipal Corporation (BMC) showed.

As of Wednesday, the city had reported 69,625 infection cases and a death toll of 3,962.
But the average doubling rate of cases–the number of days during which cases double–has now crossed 40 days, while the average growth rate of cases has dropped to 1.72 per cent, the civic body said.

“While on one hand, positive growth is being reported in the average doubling rate, the average growth percentage is also reporting a decline every day. Both these things are definitely comforting for Mumbaikars,” the BMC release stated.

The populous state of Uttar Pradesh recorded 636 new cases to cross the 20,000 marks with 12,370 being added to the count since June 1 when the Centre began the “Unlock-1” phase, gradually lifting the curbs imposed nationwide to contain the spread of the pandemic.

Delhi, which is poised to launch door-to-door surveys from June 27, recorded 3,390 new cases to take the total to 73,780. Delhi is the worst affected city and is also in the second spot in the all India tally.

The Karnataka government, meanwhile, ruled out fresh lockdown for now in Bengaluru, putting to rest speculation it was planning such a move in view of the spike in cases.

There will be only containment zones in the city and regions that have a large number of cases will be sealed, he told reporters here.

The number of COVID-19 cases in the state which stood at 3,408 as of June 1 crossed the 10,000 marks on Wednesday with the capital city topping the districts in the infection count.

The neighbouring state of Kerala reported over 100 COVID-19 cases for the seventh consecutive day, taking the total to 3,726.

WHO takes note of ’emerging evidence’ on airborne spread...

Siddha: Understanding the science and history behind mysterious cure...