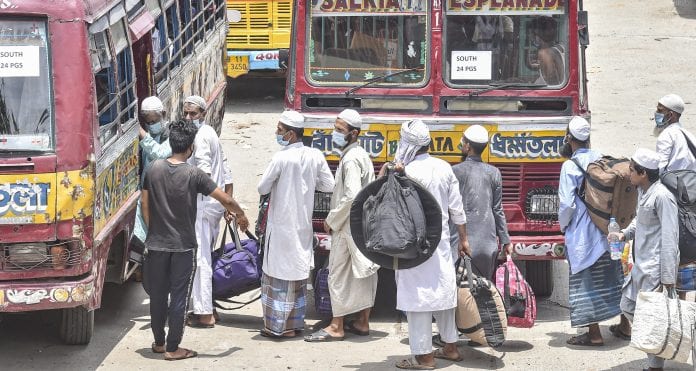 The death toll rose to 5,394 after a record single-day spike of 230 fatalities in the 24 hours since Sunday 8 AM, the Union Health Ministry said in its morning update. It showed the number of confirmed cases rising by 8,392 to 1,90,535.

India is now the seventh worst hit nation by the COVID-19 pandemic after the US, Brazil, Russia, the UK, Spain and Italy, according to the WHO’s coronavirus tracker.

India vs rest of the world

Globally, close to 62 lakh people have tested positive for the dreaded virus infection ever since it was first reported in China last December, while more than 3.72 lakh have lost their lives.

However, close to 27 lakh have recovered worldwide since then and many countries have exited or begun exiting their respective lockdowns to revive stalled economies and safeguard the livelihood of the people.

In India, the number of active COVID-19 cases stands at 93,322 while 91,818 people have recovered, giving a recovery rate of 48.19 per cent, according to the the latest health ministry data.

Globally, close to 43 per cent people have recovered so far while nearly 6 per cent have succumbed to the virus.

The health ministry said India’s COVID-19 recovery rate has been improving and the rate of fatality has seen a steady decline to reach 2.83 per cent.

“A steady decline can be seen in the case fatality rate in the country. The relatively low death rate is attributed to the continued focus on surveillance, timely case identification and clinical management of the cases,” the ministry said.

Among various states, Rajasthan, West Bengal, Assam, Odisha, Tamil Nadu, Kerala and Andhra Pradesh reported more cases even as measures continued to contain the spread and to beef up the medical infrastructure to treat those contracting the virus.

A group of health experts, including doctors from the AIIMS and  two members of an ICMR research group on COVID-19, has said that community transmission of the coronavirus infection has been well-established across large sections or sub-populations in the country.

The government has, however, maintained that India has not yet reached the community transmission stage of the disease.

The number of coronavirus cases in the national capital crossed the 20,000 mark on Monday while the death toll has risen to 523, authorities said.

As many as 8,746 patients have recovered, while there are 11,565 active cases. In a bulletin issued on Monday, the Delhi health department said the total number of cases has mounted to 20,834.

Related news: Unlock-1: Delhiites can finally get haircut, but not massages

As many as 8,746 patients have recovered, while there are 11,565 active cases. In a bulletin issued on Monday, the Delhi health department said the total number of cases has mounted to 20,834.

The death toll from coronavirus infection has risen to 523, including 50 COVID-19 deaths that took place between April 7 and May 31, nine fatalities on May 25 and 10 on May 30, it said.

The count of coronavirus cases in Gujarat rose to 17,217 on Monday after addition of 423 new infections, while the toll increased to 1,063 with 25 fresh fatalities, the state health department said.

As many as 861 COVID-19 patients were discharged from hospitals in Gujarat, taking the number of recoveries to 10,780, it said.

The state has now 5,374 active cases, of which 65 patients are on ventilator, the health department said.

Ahmedabad also reported recovery of 790 patients, the highest single-day tally so far, among the total 861 recoveries reported from across the state, it said.

In Maharashtra, the worst-hit state, more than 100 doctors and nurses from Kerala will join the medical staff at some Mumbai hospitals to help them in the battle against COVID-19 pandemic.

A total of 779 patients were discharged from hospitals in the day, taking the tally of the recovered cases to 30,108 so far, a statement said.

West Bengal reported eight more fatalities to take its death toll to 253, while the number of cases rose to 5,722 after 271 more people tested positive in the last 24 hours.

In Kolkata, people came out on the streets in large numbers, while traffic snarl was noticed at many places following the lockdown relaxations.

Some religious places also reopened for worship by the people, which was also the case in various other states.

In neighbouring Odisha, the number of positive cases rose to 2,104 after a record number of 156 cases were detected during the day. Of these, 153 were detected at various quarantine centres, while three others were found positive during COVID-19 contact tracing.

Speaking about the more number of cases in Chennai, Corporation Commissioner G Prakash told the reporters that it was because of the intensive testing in the city.

“The corporation has set up about 125 special camps across the city, where people are being tested. Since we have got enough doctors from the Public Health Department, we are also doing door to door check-ups, concentrating on the certain places and we pick the people for treatment. So, obviously the number of cases will be high. But, we believe the number of cases would go a peak and then it would slowly come under control,” Prakash said.

He also pointed out that of the total number of cases in Chennai, about 40% of the cases were from Tondairpet and Royapuram.

He further said that the local body has been concentrating on the vulnerable people in the localities where case load is high. “We have converted community halls and government schools into quarantine centres where vulnerable people including elderly people and people with diabetes and other diseases were kept and taken care of,” he said.

In Kerala, 57 new cases were reported, 55 of whom had come from abroad and other states, taking the states infection tally to 1,326. More than 1.39 lakh people are under observation in the state.

(With inputs from agencies, Prabhakar Tamilarasu, and Shahina KK)