Just a day after the Chennai police detained seven people for drawing Kolams (patterns drawn using rice flour) in front of their houses, in Chennai, protesting against the Citizenship Amendment Act (CAA) and the National Register of Citizens (NRC), the demonstration bid appears to have become a wider phenomenon.

So much so, that houses of DMK supremo MK Stalin, party MP Kanimozhi and former DMK leader Karunanidhi, on Monday (December 30) sported Kolams that had anti-NRC and anti-CAA messages. 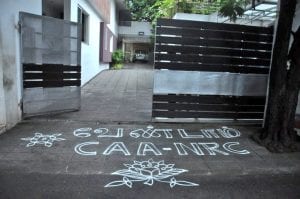 It first appeared in the house of Kanimozhi, which read ‘Vendaam CAA NRC’ (We don’t want CAA, NRC). Shortly after this, the houses of MK Stalin and Karunanidhi too had similar Kolams.

It is to be noted that the detention of seven people on Sunday (December 29), along with their lawyers, provoked an outrage, against the police, forcing more and more people to draw Kolams against the legislation. As a consequence, Twitter began trending with ‘DMK Kolam protest’ and ‘Kolam against CAA’ with pictures opposing the CAA and the NRC being posted on it.

The Chennai police action on a group of peaceful Kolam protesters in Besant Nagar had drawn flak on December 29. Stalin had tweeted out in favour of the protesters and extended his support to it.