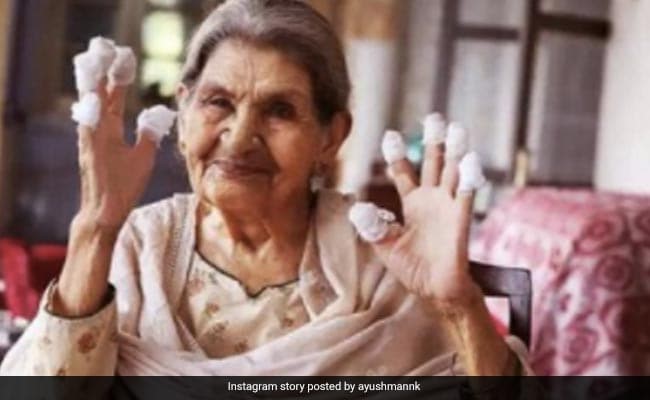 The 88-year-old Farrukh Jaffar, who was last seen as the doughty, free-spirited Begum, in Shoojit Sircar’s 2020 film ‘Gulabo Sitabo’, has passed away in Lucknow on Friday (October 15), said media reports.

Sharing the film’s dialogue and a still from ‘Gulabo Sitabo’, actor Ayushmann Khurrana wrote: “Begum gayin. Rest in peace Farrukh Jaffar ji.” While Juhi Chaturvedi, the film screenwriter too wrote an emotive post on Instagram stating that there could be no one like the Begum now or ever. She thanked Jaffar from her heart for allowing Chaturvedi to form a relationship with her. And said that now she is safe in the world of Allah. RIP 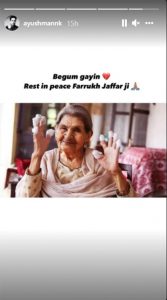 ‘Gulabo Sitabo’ was set in Lucknow, and Farrukh Jaffar, who had played Amitabh Bachchan’s (the cranky Mirza) bedridden wife Begum in the movie, was completely at home in the milieu. Hailing from Lucknow, she was Vividh Bharti’s first announcer when they had started a station in the city in 1963, said an Indian Express report.

In Gulabo Sitabo, she is the 95-year-old owner of Fatima Mahal, a woman who is not dependent on her husband and controls the money in the house.

Jaffar was also seen in Ritesh Batra’s ‘Photograph’ playing Nawazuddin Siddiqui’s grandmother, but she had played a key role in the 1981 film ‘Umrao Jaan’. In that, she essayed the role of Rekha’s mother. She was also Amma in the 2010 film ‘Peepli Live’. Farrukh Jaffar featured in brief roles in popular films such as Shah Rukh Khan’s ‘Swades’, ‘Aligarh’, Salman Khan’s ‘Sultan’, and Aamir Khan’s ‘Secret Superstar’ to name a few.

In an interview with Hindustan Times, Jaffar had once shared her experience of working with Salman Khan in ‘Sultan’. She had recalled that while filming ‘Sultan’, during the marriage scene of Salman and Anushka, she had blessed him saying that may he get married soon. To which he said with a laugh, “Aisi bad-dua mat dijiye, kabhi kabhi bola hua sach ho jata hai (Don’t curse me like this, sometimes words spoken do come true).