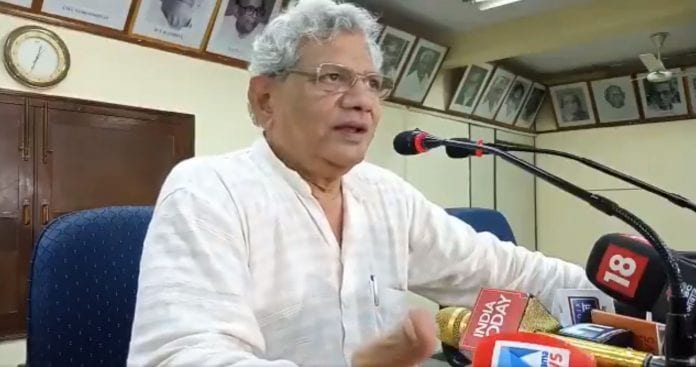 CPI(M) general secretary Sitaram Yechury, who returned from Srinagar on Friday after the Supreme Court allowed him to go there, said the situation on the ground was “completely contrary” to what the government was saying.

Yechury, who went to Srinagar to meet his ailing party colleague Mohammed Yousuf Tarigami, refused to elaborate, saying he would submit a detailed report to the apex court.

The Communist Party of India (Marxist) leader, who had filed a habeas corpus petition in the Supreme Court seeking Tarigami to be produced before it, was granted permission to visit the former MLA in Srinagar. The court had, however, said Yechury should not indulge in any kind of political activity during his visit to Srinagar.

Tarigami, a four-time former MLA and a Central Committee member of the CPI(M), is under detention in Srinagar since August 5, the day the government abrogated Article 370 of the Constitution, which gave a special status to Jammu and Kashmir, and bifurcated the state into two Union territories — Jammu and Kashmir and Ladakh.

“I visited Tarigami and enquired about his health. I will file an affidavit in court regarding his health condition and also report on what I saw there,” Yechury told reporters here, adding that during the drive from the airport to Tarigamis house, he saw that the situation on the ground was “completely contrary” to what the BJP-led government was saying.

The Left leader said after he landed at the Srinagar airport, he was told by officials that he would have to return the same day, but he convinced them that he could only leave the next day after getting a status report on his colleagues health condition as he had to report to the apex court about it.

Also read: Modi feels he has the situation under control, says Trump on Kashmir

“I met him (Tarigami) on Thursday and again on Friday morning and all I can say that in this condition, he needs periodic reviews. He was getting treated at the AIIMS and he needs to go there for treatment,” Yechury said.