The government on Monday (September 21) hiked the minimum support price (MSP) of six Rabi crops for Rabi Marketing Season 2021-22 amid a row over the Centre’s new farm bills which the farmers are worried would affect the current MSP system.

Tomar said the CCEA has approved increasing MSP of six Rabi crops. Wheat MSP has been increased by ₹50 per quintal to ₹1,975 per quintal. Procurement of wheat has more than doubled during the last five years and reached 42.6 lakh in 2020-21, the government said. 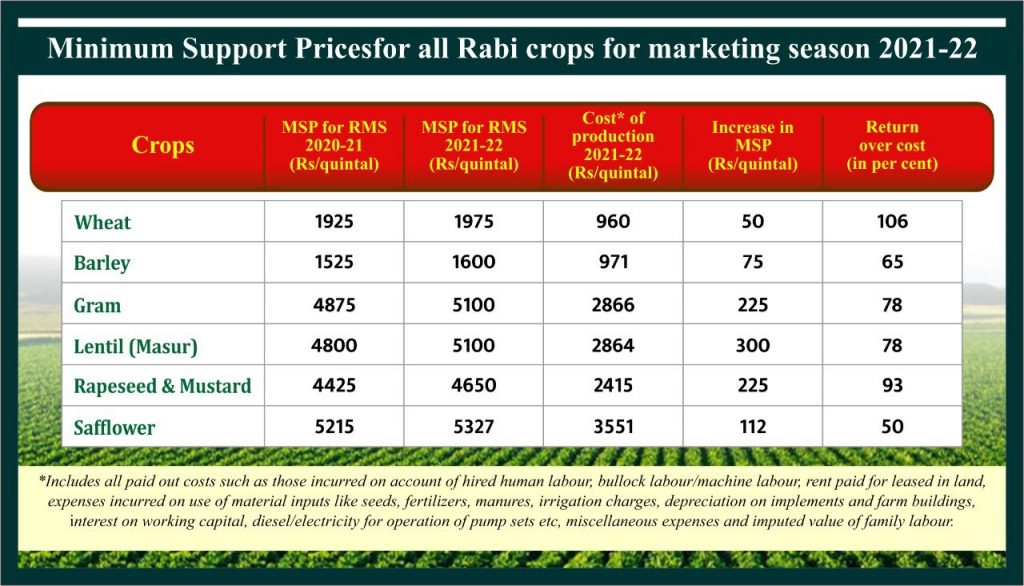 The MSP of safflower has been increased by ₹112 per quintal to ₹5327. For safflower, the return to farmers over cost of production is estimated at 50%.

The MSP mechanism provides a price guarantee to the farmers for their produce and the uniform implementation of this policy across India ensures equity, the agriculture ministry tweeted. The MSP has been announced on the basis of the Swaminathan recommendation of providing 50 per cent return over cost of production, it said.

The government has set up a buffer stock of pulses and domestic procurement of pulses is also being done under Price Stabilisation Fund (PSF), said the ministry.

The announcement comes in the backdrop of widespread protests by Opposition parties as also by farmers in Punjab and Haryana after the Parliament passed two farm bills which the government says will give farmers’ marketing freedom and better price for their produce.

The Farmers’ Produce Trade and Commerce (Promotion and Facilitation) Bill, 2020 and The Farmers (Empowerment and Protection) Agreement of Price Assurance and Farm Services Bill, 2020 were passed by Parliament by voice vote amid strong protests by the Opposition.

The minister said the government has always maintained that MSP and APMC mechanisms will continue as against a false propaganda spread by Opposition parties. Some Congress MPs walked out of the House after Tomar made the announcement about MSPs.

BJP resorts to separatist narrative to take sting out of farmersR...

After 8-hour discussions with Centre, farmers say ‘some progre...